One in 1,000-year flood happening in Quebec

April 26, 2019   by Giuseppe Valiante and Stephane Blais - THE CANADIAN PRESS

MONTREAL – Quebec public security officials called for the immediate evacuation of an area along the Rouge River west of Montreal on Thursday because of the risk a hydro dam could fail.

Simon Racicot, director of production and maintenance with Hydro-Quebec, told reporters the dam at Chute Bell was built to withstand what he called a millennial flood.

“That means a flood that happens every 1,000 years,” he said. Hydro workers discovered earlier in the day the millennial level of water had been reached.

“We are confident that the structure is solid,” Racicot said. “But the protocols force us to warn people of the danger. We are entering into an unknown zone right now – completely unknown.” 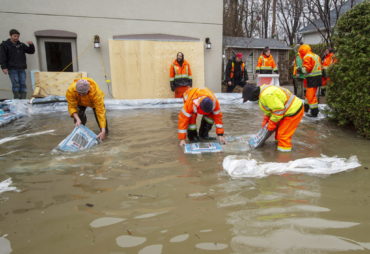 The largely rural section of river affected is in Quebec’s Lower Laurentians region, about 140 kilometres west of Montreal, stretching about 18 kilometres south to the Ottawa River.

“But we are expecting more rain over the coming hours and days, so the water levels of the Rouge River can rise,” she said in Montreal.

Guilbault said there are 23 residences and 38 cottages in the evacuation zone along the river. Quebec provincial police tweeted they were helping about 250 people get clear of the affected area as a preventive measure.

Provincial police spokesman Daniel Thibaudeau said 40 people had been removed to safety as of 7:30 p.m. Thursday, and the remainder would be taken out over the course of the evening.

Several dozen officers were taking part in the operation with the aid of all-terrain vehicles and helicopters. About a dozen people living in areas not easily reached by land were airlifted out.

Evacuees were being taken first to the town hall in nearby Grenville-sur-la-Rouge, and those with no alternative lodging were being transported to the arena in Lachute, about 40 kilometres away.

Among those headed for the arena were Denise and Martin Audet, who had just returned home from some shopping when they heard police officers yelling that the area was being evacuated.

“They told us that there was no time to pack our bags and that we had to leave because the dam was maybe going to break,” Denise Audet said. She said everything happened so quickly she “didn’t have time to be scared.”

Tom Arnold, mayor of Grenville-sur-la-Rouge, said it could be weeks before evacuees can return home, even if the dam holds.

“I don’t have confidence. The worst is yet to come,” he said when asked about the dam’s stability.

Hydro-Quebec said through social media that if the dam breaks, the water flow would have minimal impact on locations downstream once it joined with the Ottawa River.

According to the utility’s web site, the concrete dam, built in 1942, is 19 metres high and almost 60 metres long. It has the capacity to hold back 4 million cubic metres of water.

The dam scare comes as many parts of Quebec have been hit by flooding. Officials say the flood risk remains high because of a combination of precipitation in the forecast and melting snow to the north.

Earlier on Thursday, Guilbault toured the Lachute area, northwest of Montreal, where flood waters on the Riviere du Nord have risen in recent days.

She said she was impressed with the level of preparation in smaller communities and was satisfied that the number of people on the ground working on flood relief – which includes nearly 1,000 Canadian soldiers – was sufficient.

Guilbault added she wouldn’t hesitate to ask for more help if necessary.

Quebec public security officials said more than 2,500 homes were flooded and more than 2,100 were isolated Thursday, meaning they were considered cut off due to washed out roads or landslides.

Authorities also warned specifically against landslides reported in various parts of the province.

One person has died since widespread flooding began in the province.

In Montreal, officials raised the security level and increased the number of teams on the ground amid fears flooding could get worse in the coming days but stressed the situation was under control.

Mayor Valerie Plante warned that anyone who was flooded in 2017 should prepare their homes for more flooding – and possible evacuation – if they haven’t done so.

“The threat is actually very concrete and direct and this is the message we want to send the entire population,” she said.

Environment Canada issued a rainfall warning for Montreal with 30 to 50 millimetres expected Friday and Saturday.