The wind storm that struck Ontario and Quebec on May 4 and 5 will significantly test the capacity of insurers, independent adjusters, call centres and restoration contractors, Crawford and Company (Canada) Inc. told Canadian Underwriter Monday.

Generally speaking, wind claims are pretty straightforward from a coverage standpoint, “so capacity, across the industry, is likely to be an issue because of the widespread nature of the damage,” said Jim Eso, senior vice president of property & casualty with Crawford Canada in Kitchener, Ont. 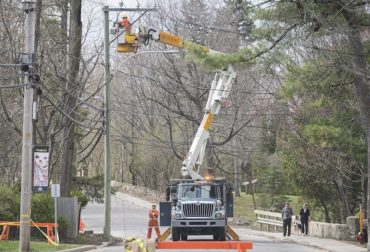 A Hydro Quebec crew works on restoring power in the town of Hudson, Que., west of Montreal, Saturday, May 5, 2018, following a storm in Quebec and parts of Ontario. THE CANADIAN PRESS/Graham Hughes

Catastrophe Indices and Quantification Inc. (CatIQ) has declared the storm a cat event, meaning it cost insurers at least $25 million in property damage. [Preliminary damage estimates are anticipated in two weeks.] Eso said earlier that Crawford’s “insurance company clients” considered the event to be a cat.

The Canadian Press reported that the storm brought wind gusts of up to 120 kilometres per hour Friday, downing trees and power lines and knocking out power to hundreds of thousands of customers in Ontario and Quebec. Besides considerable property damage, three people were also killed as a result of the storm.

Eso said wind and rain are relatively frequent events in April in Ontario, and this wind event in early May is not too unusual from a timing perspective. “But it is very unusual in how suddenly the storm grew, how large an area the storm impacted, and how high the wind velocity became in multiple locations,” he said. “It is also unusual following so closely after the April ice storm.”

The ice storm in Ontario and Quebec from April 14-16 could cost insurers up to $164 million, Verisk Analytics’ Property Claim Services said last week. Toronto had been under a flood watch for two days after freezing rain and ice pellets left roads and sidewalks treacherous, with police responding to more than 1,400 auto collisions. At the time, Gore Mutual and Aviva Canada told Canadian Underwriter that they considered the storm to be a cat event.

For the May wind storm, Eso said Crawford Canada expects to see smaller average claim costs than the ice storm. Damage includes shingles blown off roofs, and trees downed on fences and in yards. “That said, there will still be some larger claims if, for example, a large tree struck a building, or if rain water entered the home due to wind damage to the roof.”

Crawford Canada has implemented its international cat response team, involving adjusters across Canada and adjusters from the international group travelling in from outside the country. Another adjuster, ClaimsPro, said in a press release Monday “to help process the extremely large volume of calls, [it] has called in resources and support from across the country, as well as from our U.S. partners, to further increase capacity and expedite the claims process for our clients.”

More News
Related
How the pieces of the puzzle fit together during a catastrophe
Severe weather, nat-cats cause record insurable damage in Canada: IBC/CatIQ
Claims professionals speak out amid allegations of contractors providing insurance advice
Contractors know their role: Restoration contracting firms speak out