LAKE ST. MARTIN, Man. – Five years after nearly 2,000 residents were forced to leave their homes due to extensive flooding, Indigenous and Northern Affairs Canada (INAC) has put out a bid for tenders to build 150 new houses at Lake St. Martin First Nation. 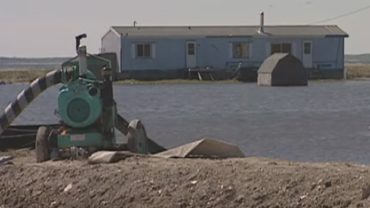 The bid closes Dec. 8 and INAC hopes to have residents moved in by the fall of 2017.

INAC told CTV News in an email that the First Nation has undertaken a housing survey to determine which evacuees will get to live in the new homes and to figure out what its housing requirements will be.

Related: MP says flood damaged homes from Manitoba reserve may have been sold

INAC said it is also working with the First Nation to finalize the number of houses needed to get all displaced residents back home.

According to INAC, as of Sept. 30 the evacuation from the 2011 flood has cost approximately $151 million.

Each month that goes by, $1.6 million more is spent for all the evacuated residents from the Lake St. Martin area, including Lake St. Martin, Pinaymootang, Little Saskatchewan and Dauphin River First Nations.

That’s because many evacuees are still living in Winnipeg in hotels and rental suites while waiting to return home.

Lake St. Martin is about 225 kilometres northwest of Winnipeg.