OTTAWA – A new round of repairs is in store for pathways around Parliament Hill, after the second major flood in three years.

Water levels on the Ottawa River remain a metre above normal and crews working for the National Capital Commission are just beginning to assess the damage to infrastructure near the Ottawa River.

The Crown corporation responsible for federal land in the capital region – including along the Ottawa River and the Rideau Canal, 24 Sussex Drive and Rideau Hall – spent about $6 million on repairs after the last flood, keeping some popular tourist paths closed for many months for extensive reconstruction. 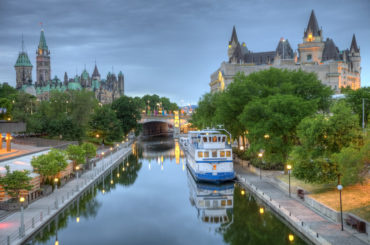 Some repairs to pathways on the Quebec side of the river weren’t finished by the time the second damaging flood came this spring.

“Cleanup has already begun, inspections have begun, so we’re hoping to reopen them as soon as possible. We’re hoping it’s not going to take a year for these,” said Dominique Huras, a spokesperson for the commission.

Some social-media images from a river pathway in Gatineau, Que., across from Parliament show warped and washed-out asphalt, which Huras said was from an incompletely repaired portion of the pathway.

She said artificial rock formations installed along the river to protect against erosion after flooding two years ago seem to have held, at least along that portion of the pathway. But the rocks may not be the key factor in determining how much repair the area will need.

“That’s not the resilient part of it, it’s the vegetation that’s there that’s supposed to absorb and protect,” Huras said. “The problem is that vegetation takes about three to four years to sink its roots so that it won’t get washed away.”

The three stages of repairs and upgrades the NCC undertook on pathways near the river gives them an opportunity to see how their higher standards withstood this year’s flooding, Huras said. The NCC will get to see how repairs and modifications completed in 2016 or 2017 fared versus more recent work.

Huras said any money needed for new fixes to projects that hadn’t been completed will likely come out of the same pool of $55 million the federal government granted the commission in 2018 to repair and maintain major infrastructure, which included work on the previous year’s flood damage. Repairing other damage will require money from other commission funds or new appropriations from the federal government.

Like authorities elsewhere, Huras said the commission is learning it can no longer treat extreme events like flooding as “exceptional.”

“We’re looking at the whole process as this will be a reoccurrence. We’re not seeing it as a one-in-100-year flood any more,” Huras said.

The president of an Ottawa cycling organization said Wednesday that she hopes the commission will get the capacity to plan for more extreme weather.

“These last couple of events have been extreme. I think it shows we aren’t really resourcing the NCC sufficiently to keep up with the changing climate,” said Heather Shearer.

She said the pathways are extremely popular with cyclists and others, and they bring “vibrancy” to the capital city.

“I think we’ve had a couple of exceptional years, but I am concerned that this is something we’re going to see in the future and we have to be ready for it,” Shearer said.