As of March 8, cumulative preliminary tornado, hail and straight-line wind reports in the United States for the year have all been more than double their respective 2005-2015 averages, according to the records of the National Oceanic and Atmospheric Administration’s (NOAA) Storm Prediction Center. 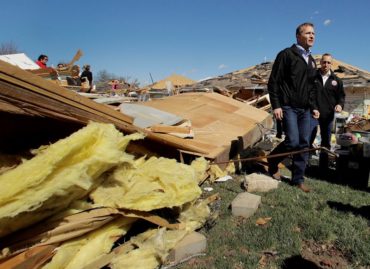 Jeff Waters, a meteorologist with Risk Management Solutions, Inc. (RMS), used the NOAA statistics on Thursday in a statement responding to the severe convective storms hitting the U.S. Midwest recently. The outbreak of severe convective storms across the U.S. Midwest beginning on March 6 caused widespread damage in Missouri, Iowa and Minnesota, with minor damage in Kansas, Arkansas, Illinois, Indiana, Kentucky, Nebraska, Oklahoma and Wisconsin, RMS said in the statement.

“The 2017 U.S. severe weather season has been particularly active thus far,” Waters said, attributing much of the active season with warmer-than-average ocean waters in the Gulf of Mexico. “These winter sea surface temperatures, averaged over the Gulf of Mexico, were the warmest on record since 1981,” Waters reported. “This has helped to generate large amounts of warm, moist air to flow onshore and fuel unstable conditions that drive severe activity in mid-latitude weather systems.”

Waters said that so far, the severe weather events have caused “significant property damage in many parts of the country, but losses have been within expectations of the (re)insurance market as a whole. Nevertheless, it is important for insurers and reinsurers to continue to monitor severe weather activity throughout the year, as their aggregate impacts could pose a more material threat to respective catastrophe budgets and reinsurance programs,” he added.

According to RMS’ event response team, at least 700 properties are reported to have been destroyed or damaged so far. Most of the reported damage has been caused by tornadoes, with additional damage due to straight-line winds. The statement said there were 525 filtered reports of severe weather across the U.S. on March 6, with 42 reports of tornadoes and 385 reports of strong winds.

The Associated Press reported on Tuesday that in Oak Grove, Mo. alone, 483 home and 10 to 12 commercial buildings were damaged. The storms also resulted in 12 people being treated for non-life-threatening injuries. Missouri Gov. Eric Greitens has declared a state of emergency.

RMS said that damage assessments are currently being undertaken by the National Weather Service and local authorities. A clearer picture of the damage will likely take several days to emerge.

The event comes less than a week after at least 16 tornadoes impacted more than 500 counties across the Midwest, damaging several hundred buildings.

On average, 76 tornadoes occur in the U.S. in March (data from 1996-2015), the RMS statement said. The most tornadic month of the year is May, with 276 tornadoes occurring across the U.S. on average. In March, most tornadoes tend to occur in Oklahoma, Arkansas, Mississippi and Alabama, and are less common in the Midwest. “It is even more unusual in March to have tornadoes so far north,” the statement concluded.