JOHN’S, N.L. – From extreme pack ice to record-breaking snow falls, it’s the winter that just won’t let go across much of Newfoundland. 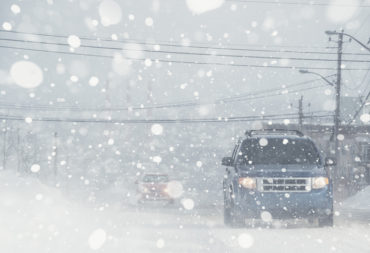 There are at least 230 centimetres of snow (more than seven feet) on the ground in Gander – the town featured in the hit Broadway show “Come From Away” – smashing the previous record for the same day in 2001.

More than 100 centimetres of that fell over the last five days. That’s almost as much snow as Toronto gets on average in a whole winter.

At least another 10 centimetres was falling on Gander through Tuesday, as another powerful storm was forecast to dump up to 75 cm in some parts of the weather-battered province.

“I can look out my living room window and my son’s truck is parked in my driveway and I can’t see any of his truck – the snow bank is so high on my front lawn,” said Gander resident Beulah Cooper, one of several locals whose kindness to stranded airline passengers after the 9/11 terror attacks inspired the story of “Come From Away.”

“Thank God I’m not in need of anything outside the house.”

She said it’s one of the worst winters in 40 years – and Environment Canada meteorologist David Neil agreed it’s all a bit much even for hardy residents used to severe weather.

“It has just been a relentless week,” said Neil, adding snow drifts at his own home in the area are above his head. “People are getting vehicles stuck.

“There are roads where two lanes are down to one lane, and three-lane roads down to two.”

Southeast of Gander, the Avalon Peninsula and St. John’s harbour have seen unusually thick, dense pack ice brought in by high winds over the last week.

Darrell Mercer of Marine Atlantic said a sudden shift in conditions trapped its ferry MV Highlanders off Cape Breton with 209 people on board.

“As the vessel was departing this morning they didn’t anticipate any issues but unfortunately the ice pressure has worsened and they are now stuck awaiting assistance,” he said in an interview.

Mercer said it’s hoped the 200-metre-long vessel will soon be able to free itself or that a coast guard icebreaker or another ferry can assist.

On Monday, residents of Bell Island, northwest of the capital St. John’s, plucked five trapped dolphins from pack ice and carried them to open water, but a humpback whale died when no one could reach it in a nearby cove.

On Tuesday, Environment Canada issued several blizzard warnings and special statements for eastern and central areas of the island.

The Bay of Exploits was expected to get heavy snowfall and strong northerly winds that could bring gusts of 80 km/h over most areas and up to 100 km/h along the coast.

Snowfall amounts could reach 75 cm there, with the highest totals likely in the Gander area, which was under a blizzard warning along with Clarenville, the Bonavista Peninsula, Terra Nova and Grand Falls.

Some flights were cancelled at the St. John’s airport and many central region schools were closed or delayed their openings.

These conditions are expected to continue as the system continues into Wednesday, after nearly 17 cm of snow fell on the St. John’s area Monday.

On the bright side? Neil said sun and warmer temperatures – “almost in the double digits” – are expected later this week.