Aon plc reported Tuesday its commercial risk solutions revenue of $984 million in the three months ending March 31, up 2% from $961 million during the same period in 2016, while net income, company wide, dropped 9% due in part to restructuring costs. 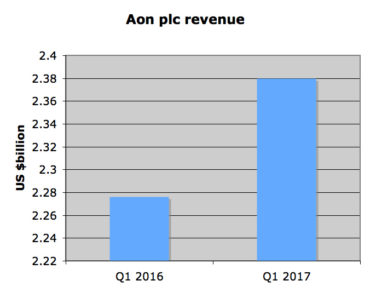 Through its retail brokerage Aon places property, and a variety of liability coverages, including professional, and directors’ and officers’, transaction and cyber, among others. Through its reinsurance brokerage, Aon places treaty and facultative reinsurance. Its Aon Securities Inc. subsidiary underwrites insurance-linked securities and arranges for financing of insurers. 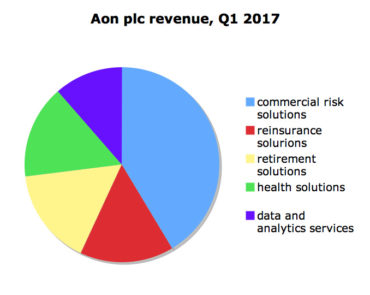 Restructuring expenses in Q1 were $144 million.

Aon said it “expects to invest $900 million in total cash over a three-year period, excluding $50 million of non-cash charges, in driving one operating model across the firm.” Of that, $700 million will be cash restructuring charges and another $200 million will be capital expenditures.

To date, Aon has incurred 19% of the total estimated restructuring charges.

More News
Related
Combined ratio down 4.6 points for Everest Re
Q1 insurance premiums up 95% at Berkshire Hathaway after adverse development reinsurance agreement with AIG
Commercial premiums down 15% for AIG
Aon plc net income up to US$769 million in Q2 2017 from US$300 million in Q2 2016