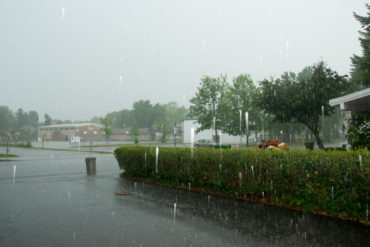 Heavy rain on Sunday raised the water levels of streams and rivers over a large swath of western, central and southern Quebec, but the situation is expected to stabilize over the next few days.

The organization that monitors flooding in the province said several smaller rivers and streams had reached their limit.

Water levels of larger rivers could continue to rise over the next few days, but they will do so at a slower rate, Hydro Meteo said.

Pierre Corbin, operations manager at the flood-monitoring firm, said recent heavy rains coupled with the annual spring thaw are to blame for the flooding.

Major waterways like the Ottawa, Richelieu, and St. Lawrence Rivers have high water levels this year and the rain caused spikes in the smaller rivers and streams they supply.

Corbin warned with more rain in the forecast this week, authorities will continue to monitor the situation as the threat of more flooding will remain for several days.

“While it’s not dropping as fast as it rose, there is a stabilization,” he said.

Flooding caused the collapse and closure of part of a provincial highway near Rawdon, Que. late Sunday, about 80 kilometres northeast of Montreal.

Mayor Bruno Guilbault said several families were also forced from their homes after the nearby Ouareau River overflowed.

Guilbault said they haven’t seen water levels like this in many years, and hopes the levels will decrease.

“But it always depends on the temperatures and I don’t check the weather,” he said with a laugh.

Flood watch in many Quebec communities this week. Wet weather is on the way starting tomorrow. pic.twitter.com/C7rwcl2Xcc

More News
Related
Too early to confirm costs from flooding in B.C., Ontario, Quebec and Maritimes: Aon
May storms in Ontario, Quebec and the Maritimes caused hundreds of millions in damage and damaged more than 5,200 homes: Aon Benfield
Flooding in Ontario and Quebec in April and May estimated to cost “well into the millions” in U.S. dollars: Aon Benfield
Spring flooding in Ontario and Quebec caused more than $223 million in insured damage: CatIQ