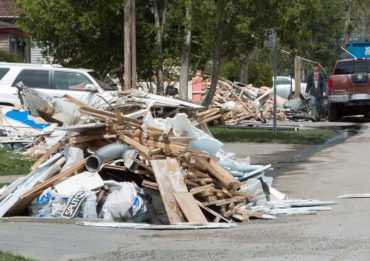 Flood debris piles up on a street Monday, May 15, 2017 in Laval, Que. as residents clean up as the flood waters recede. THE CANADIAN PRESS/Ryan Remiorz

The government’s current financial aid program isn’t inadequate, but could be improved, the premier told reporters in Montreal.

Thousands of Quebecers will likely be seeking help after record April rainfall caused extensive flooding across the province.

Related: Too early to confirm costs from flooding in B.C., Ontario, Quebec and Maritimes: Aon

Some weary residents, briefed by government officials, have complained the program doesn’t meet the needs of those affected.

Couillard has said the maximum amount that can be given to flood victims will likely be increased.

Related: Flooding in Ontario and Quebec in April and May estimated to cost “well into the millions” in U.S. dollars: Aon Benfield

“We’re trying to make it as broad as we can, that’s the reason why we’re working on improving the program,” Couillard said. “Probably broadening criteria for inclusion in the program and also looking at the financial thresholds for compensation.”

Couillard said about $2 million has been doled out to help cover living expenses and advances for needed repair work.

In many flood-stricken areas across the province, there has been a slow but steady shift towards cleaning up as water levels have continued to recede. In other areas, water levels remain high but are expected to drop in the coming days.

The premier said he understands how discouraging it must be for those returning home to heavy water damage and daunting paperwork to apply for compensation.

“Our effort did not stop the moment we heard that the water was receding – it starts,” Couillard said. “We have many, many weeks ahead of us of working with people to make sure they go back home safely and they can resume their life.”

More than 4,000 homes were still flooded as of Monday night in 102 different cities and towns across the province and roughly 3,500 people have been evacuated.