MONTREAL – Canadian Pacific Railway is directly responsible for damages caused when a runaway train carrying crude oil derailed in 2013 in Lac-Mégantic, according to new allegations recently filed in court by the Quebec government. 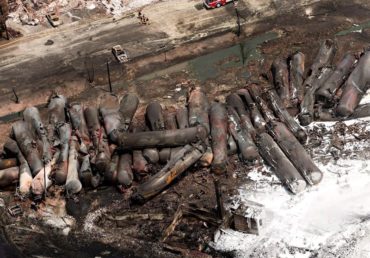 The downtown core lays in ruins as firefighters continue to water the smoldering rubble, Sunday, July 7, 2013 in Lac-Mégantic, Que. after a train derailed igniting tanker cars carrying crude oil. Transport Canada has approved rules intended to reduce the risk of runaway trains in response to recommendations by the Transportation Safety Board following the deadly derailment in Lac-Megantic, Que. THE CANADIAN PRESS/Ryan Remiorz

The railroad was responsible for the crude oil from the moment it picked up the shipment in the United States until the product’s final scheduled destination in New Brunswick, the province alleges.

Quebec is seeking to modify its $409-million lawsuit against CP (TSX:CP) to reflect the new allegations and will argue its case in court Nov. 8.

In July 2013, an unmanned train owned by Montreal Maine and Atlantic Railway Ltd. (MMA) and running on the company’s tracks derailed and exploded in Lac-Mégantic, killing 47 people and destroying part of the Quebec town’s downtown core.

CP maintains it has no responsibility for the disaster because it occurred after it handed off the train to MMA for the final leg of the journey to Atlantic Canada.

The Quebec government’s initial lawsuit against CP, filed in 2015, stated the railroad “should have known” the product being shipped was volatile and dangerous and “omitted to take the necessary steps to guarantee the crude didn’t cause damage to people or to the environment.”

Now, the Quebec government is taking a harsher line.

“Due to its agreement with the shipper, Canadian Pacific was, at all times, responsible for the crude oil from its point of initial possession until its delivery,” says Quebec’s amended lawsuit, which was filed Sept. 8.

CP rejected Quebec’s modification request and argued in its response, also filed in court, that the province’s motion “will unduly delay proceedings, (is) contrary to the interests of justice, and (is) useless and contrary to the principle of proportionality.”

A CP spokesman said the railway will not comment on the developments.

CP is the only company accused in the derailment to have refused to pay into a settlement fund for victims and creditors of the tragedy.

MMA didn’t have enough insurance to pay damages to victims and creditors, so it filed for bankruptcy in the United States and Canada. The settlement fund is tied to the bankruptcy proceedings on both sides of the border.

All the roughly 25 companies – except MMA – that paid into a $440-million fund received legal immunity from future prosecution related to the derailment.

The rail company is facing a class-action suit in Quebec Superior Court from victims and creditors of the disaster.

It is also dealing with two other claims in the United States totalling more than $200 million.