RENO, Nev. – More winter snow and rain pummeled the West on Thursday as the first in a series of expected storms soaked morning commuters in much of California, dumped 18 more inches of snow in the Sierra Nevada and closed schools in Oregon. 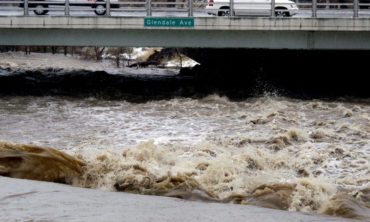 Traffic crosses the raging Truckee River, Sunday, Jan. 8, 2017, where it runs near the Grand Sierra hotel-casino along a line that divides the cities of Reno and Sparks, Nev. More than 1,000 homes have been evacuated due to overflowing streams and drainage ditches in the area, which remains under a flood warning through Tuesday. (AP Photo/Scott Sonner)

The first of three anticipated winter storms hit the Lake Tahoe area, with another 6 feet of snow possible by Monday in the upper elevations of the Sierra Nevada.

Since Jan. 1, more than 15 feet of snow has fallen at some Tahoe area resorts – the most in more than five years.

“We’ve been sold out for the last couple of weekends. It’s great. We’re definitely loving the snow,” he said.

A storm system dumped nearly an inch of rain on San Francisco and more than 3 inches at some locations in the Napa-Sonoma wine country. Some flights at San Francisco International Airport were delayed several hours.

In Southern California’s Santa Monica Mountains, rain fell at rates of up to a half-inch an hour and a rockslide closed canyon roads near Malibu. The Hollywood Reservoir got almost three-quarters of an inch rain.

In Sacramento, a windstorm with gusts topping 50 mph destroyed three historic trees Wednesday night that were planted at the California Capitol about 120 years ago to honour Civil War veterans.

The National Weather Service in San Diego warned that five-day rainfall totals would likely be substantial and that mud and debris flows could occur as heavy rains fell on wildfire burn scars east of Los Angeles.

In Phoenix, a hot air balloon festival was cancelled due to a winter storm warning. Forecasters said wind could gust to 40 mph beginning Friday night.

Grand Canyon National Park closed some roads on the South Rim due to snow and unsafe driving conditions.

The road woes were also felt to the north in Oregon. A 45-mile stretch of Interstate 84 between Troutdale and Hood River remained closed because of ice.

The temperature in Hood River was expected to climb to slightly above freezing, melting some of the ice that has turned the highway into a skating rink.

With snow and ice hanging around, schools were closed in several districts along with some state agency offices.

Washington transportation officials said conditions on Interstate 90 over Snoqualmie Pass had improved enough to allow crews to start clean-up efforts. They hoped to re-open the eastbound lanes later in the day.

Crews were also working to break up and move 20 to 30 trees that came down onto the interstate during this week’s ice storm, officials said.

In California, two more storms were expected to arrive Thursday night and Sunday.

Overall, California has seen a significant retreat from the once-statewide drought. About 58 per cent of the state remains in moderate, severe, extreme or exceptional stages of drought.

Jumping over the flood waters here in N. California…More rain for the middle of next week! Foggy now but the sun will shine later today!:) pic.twitter.com/2IfMXh892P

These signs are in place for a reason!! This is Carson Pass on SR 88 and you can't even see the road pic.twitter.com/PDQYzuLK9q