OKLAHOMA CITY – Oklahoma regulators are ordering the shutdown of more disposal wells and restricting the volume of others near where a magnitude 5.0 earthquake struck. 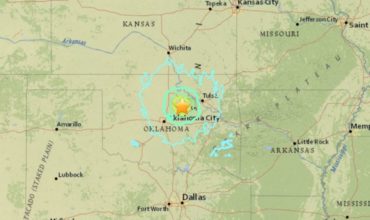 The plan requires seven wells within six miles of the earthquake’s epicenter to be shut down by Nov. 14. Photo: @ABC.

The plan released Tuesday by the Oklahoma Corporation Commission’s Oil and Gas Division requires seven wells within six miles of the epicenter to be shut down by Nov. 14.

The area affected is about 700 square miles.

The earthquake Sunday damaged dozens of buildings in Cushing, Oklahoma, a key world oil hub. Officials say no damage has been reported at Cushing’s oil terminal.

Dozens of buildings were damaged after a magnitude 5.0 earthquake shook Cushing, Oklahoma Sunday night. No serious injuries were reported. pic.twitter.com/WGpjIZ4Jo6