Some reinsurance programs ‘have been called upon four or five times’ in 2017: CMS

With analysts estimating catastrophe losses exceeding $100 billion to the property & casualty insurance industry in 2017, a law firm suggested Wednesday there is a risk disputes over reinstatement of reinsurance coverage and erosion limits, between North American insurers and reinsurers. 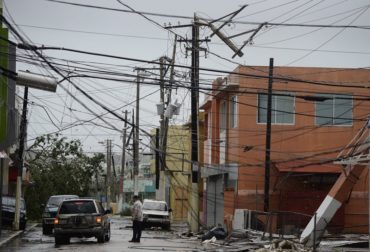 FILE – In this Wednesday, Sept. 20, 2017 file photo, power lines are down after the impact of Hurricane Maria, which hit the eastern region of the island in Humacao, Puerto Rico. In the wake of Hurricane Maria, Facebook pledged to send a “connectivity team” to help restore communications in ravaged Puerto Rico. It’s just one of several tech companies – among them Tesla, Google, Cisco, Microsoft and a range of startups – with their own disaster response proposals, most aimed at getting phone and internet service up and running. (AP Photo/Carlos Giusti, File)

“After what is likely to be the costliest year for natural and man-made catastrophes in North America, with wildfires still raging in California and several weeks of the North Atlantic hurricane season still to go, many direct US insurers will suffer from the cumulative effects of multiple major loss events,” stated Simon Kilgour, an insurance partner with law firm CMS, said in a press release.

SCOR SE suggested earlier that catastrophe losses for the private insurance market “should reach” US$95 billion, from the earthquake in Mexico and hurricanes Harvey, Irma and Maria. More than 300 died and at least 44 buildings collapsed in Mexico as a result of an earthquake Sept. 19, the United States Geological Survey reported at the time.

Insured losses from Hurricane Maria – which made landfall Sept. 20 on the U.S. island territory of Puerto Rico – were estimated earlier by Karen Clark & Company to exceed US$30 billion.  On Sept. 10, Hurricane Irma made two separate landfalls in Florida, causing major flooding in cities including Jacksonville. After making landfall Aug. 25 in Texas, Hurricane Harvey caused major flooding in Houston.

“The truly dangerous sting in the insurers’ tail is that in the pressure to maximise reinsurance recoveries, where some programmes have been called upon four or five times, disputes about erosion of limits and reinstatement are on the cards,” CMS said Wednesday. “It is foreseeable that many direct insurers will run out of sideways catastrophe reinsurance cover by the end of the year, which has not happened for a very long time.”

Fitch Ratings Inc. warned Sept. 26 that catastrophe losses this year “will constitute a capital event for a number of (re)insurance companies, as opposed to just an earnings event.” Catastrophe losses for all of 2017 for the global insurance and reinsurance sectors “will exceed” US$100 billion “and could reach close to” US$190 billion on a pre-tax basis, Fitch added at the time. But Fitch added that “very strong capital levels going into this year greatly limit any risks to solvency,” noting there is “total statutory capital of the U.S. property casualty industry” of more than US$700 billion.

The day before Maria made landfall in Puerto Rico, A.M. Best Company noted that the “the growing frequency of severe hurricanes in the Caribbean could result in higher reinsurance costs when contracts are negotiated” in 2018.

“Reinsurance limits after Hurricane Irma need to be reinstated,” A.M. Best said at the time. “Although most companies have already purchased automatic reinstatement coverage to protect against a second event, not all companies are prepared to cover a third.”

Risk Management Solutions Inc. stated Sept. 20 it had estimated the insured loss from Hurricane Irma will be between US$35 and US$55 billion.

Two weeks earlier, Verisk Analytics Inc.’s AIR Worldwide unit was estimating insured losses from wind, flood, and storm surge combined, arising from Hurricane Harvey, were expected to exceed US$10 billion. That estimate does not include the U.S. National Flood Insurance Program, which subsidizes property insurance in some cases.

“Reinsurance programmes have now been called upon four, five or sometimes more over the course of 2017,” CMS stated Oct. 18.

Hurricane Katrina, which made landfall in 2005 and caused major flooding in New Orleans, cost the industry $80.7 billion, indexed for inflation to 2016 U.S. dollars, Swiss Re reported earlier. Hurricane Katrina was the costliest insured disaster from 1970 through 2016, Swiss Re said in a sigma report – Natural Disasters and Man-Made Catastrophes in 2016. Hurricanes Sandy, Andrew, Ike and Ivan ranked third, fourth, seventh and ninth respectively. The earthquake and tsunami off the coast of Japan ranked second while the Sept. 11, 2001 attacks ranked fifth. Swiss Re’s list of the 40 costliest events from 1970 and 2016 included 16 named North Atlantic hurricanes plus Tropical Storm Allison, which placed 31st with industry-wide losses of US$4.89 billion.