The Town of Churchill in Manitoba is reporting the “temporary loss of its rail line” into the community from recent flooding. 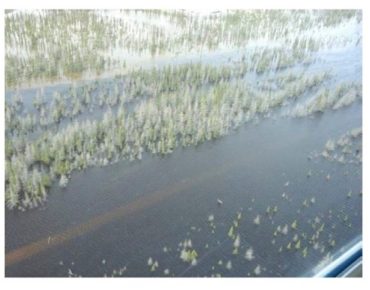 Flooding has submerged a section of the Hudson Bay Railway track. Photo: OmniTRAX.

According to a statement from the town released earlier this week, “unprecedented” snowfall in March that resulted in over 100 centimetres of snow and “unparalleled” high water flows along the Churchill River led to flooding and continued high water flows.

The Canadian Press reported on Friday that the only ground transportation to the town in northern Manitoba has been suspended indefinitely and is not expected to resume until winter. The owners of the Hudson Bay Railway line, which is used to transport food, supplies and people to the remote town of 900, told the Canadian Press that flooding submerged a section of the track and stopped service on May 23 has caused severe damage.

The town said in the statement that staff has met with ministers in the provincial government and proposed a working group to strategize issues related to the loss of the rail line, including those related to increased cost of living, tourism losses, employment losses and employment insurance.

The town also reported that it has secured “additional air transport and freight linkages” to serve the community in the short-term “through discussions with and assistance from” Calm Air International and Gardewine Group Limited Partnership.

A June 2 press release from Gardewine said that the temporary freight service solution to Churchill from Winnipeg and Thompson is in response to the closure of the Hudson Bay Railway line between Gillam and Churchill and “will be in effect until rail service is restored.”