HAPPY VALLEY-GOOSE BAY, N.L. – Police in Labrador say residents of a small community surrounded by water are being evacuated as an ice jam causes a river to swell and flood the area. 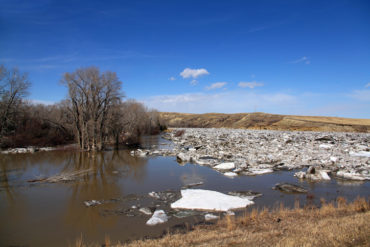 RCMP Cpl. Rick Mills says the air lifts from Mud Lake began at about 5 a.m. local time today as the Churchill River continued to rise and threaten residents of the largely seasonal community.

He says the ice is blocked up at the mouth of the river going into Lake Melville, causing water to back up to most people’s houses.

Local provincial legislature member Perry Trimper says homes have been lost, and the Churchill River is as it has never been before but some people are choosing to stay in Mud Lake.

Military aircraft are being used to transport people to nearby Happy Valley-Goose Bay, but it wasn’t clear how many residents had been removed or lived in Mud Lake.

Mills says it was the highest he had seen water levels, adding that Mud Lake residents often have to be flown out during the spring ice breakups.

The view over Mud Lake. Many homes flooded. Community was evacuated by helicopter this morning #cbcnl pic.twitter.com/gNoLxvlNhC

A view from the sky of Mud Lake and Mud Lake Road. Houses and vehicles submerged. Saw one person and some dogs on higher ground #cbcnl pic.twitter.com/JH3HtCgTZh