THE PAS, Man. – Rising ice and flood waters have forced hundreds of people from their homes in Manitoba. 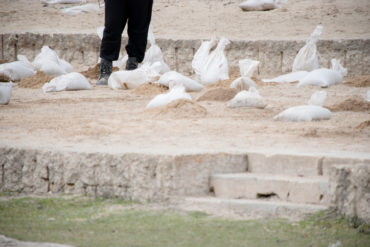 Jason Small of the Canadian Red Cross says 107 people from the Opaskwayak Cree Nation are being temporarily housed in hotels in The Pas about 500 kilometres northwest of Winnipeg.

He says another 325 people were evacuated from their homes earlier this month from five other First Nations.

Manitoba forecasters issued a flood warning on the weekend for some areas affected by ice jams on the Carrot and Saskatchewan rivers.

The province says water levels were going down in some rivers until storms dumped about 25 millimetres of precipitation on the weekend.

Small says the evacuees are being provided with lodging, food and other living expenses.

“We are doing this on behalf of the federal government and supported by them,” Small said Monday.

Related: Volunteers in Manitoba town scramble to halt flooding from nearby river

The other First Nations affected include the Peguis near Winnipeg, the Sioux Valley and Canupawapka Dakota near Brandon, the Waywayseecappo near Russell and the Long Plain near Portage la Prairie.

Manitoba says it issues warnings when rivers or lakes are expected to exceed flood levels within the next 24 hours.

There was no immediate word on when people might be allowed to return to their homes.