FREDERICTON – Thane Mallory says the picturesque water view out the back window is what keeps him going back every day to Gulliver’s World Cafe, his restaurant in Gagetown, N.B.

“I wake up every morning and look out the back window and I say, that’s beautiful,” Mallory said Wednesday. “That love affair kind of ends this time of year when I look outside.”

The 1887-era building is normally about 20 metres from the water’s edge. On Wednesday, debris-filled flood water lapped against the building. 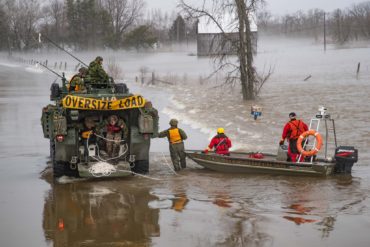 By mid-day Wednesday, water levels in the scenic summer tourist destination were about six inches below last year’s record levels, and continuing to rise.

“Instead of using the word ‘rising,’ we’re using the word ‘jumped,’ because that’s what it has done this year. All of a sudden in less than 24 hours it’s up two feet, it’s up 39 inches, it’s up.”

Mallory said he just wants the flood water to go away, but officials said Wednesday that river levels in Gagetown and further south along the Saint John River system were expected to continue to rise.

“We are already seeing impacts from high water in communities all the way south to Saint John. The number of impacted properties and infrastructure will continue to increase,” New Brunswick EMO director Greg MacCallum said Wednesday afternoon.

Rising waters had reduced the Trans-Canada Highway westbound to a single lane east of Fredericton by Wednesday afternoon, and officials said the highway would be closed completely to traffic between Oromocto and Riverglade as of 7 p.m.

Ahmed Dassouki of the Department of Transportation said he expected the closure would remain in place for at least a few days.

MacCallum said he and Premier Blaine Higgs surveyed the flood zone Wednesday by helicopter, and saw a lot of damage.

“In general it resembles very much the kind of things we saw last year,” he said.

Officials have warned residents of flood-prone areas to get out while they can.

Late Monday, residents in parts of Saint John were given voluntary evacuation notice.

The Saint John Emergency Measures Organization said water levels could reach 5.3 metres by Friday, and flooding and road closures could isolate some homes for five days or more.

The provincial government said its offices in downtown Fredericton were open for essential services only, as flood levels in the capital were back at last year’s levels.

It said civil servants who are personally affected by the floods and “need to tend to their obligations” were not required to come to work.

Many streets and parking lots in Fredericton remain under water, and city spokesman Wayne Tallon said a number of motorists had been fined for ignoring barricades.

Across the province 126 roads have been impacted by the flood waters and 75 of them are now closed.

Some 250 Canadian soldiers are assisting in the flood relief efforts. Lt-Col. Sean French said many are using military vehicles to help gain access to flooded areas, while others are helping to fill sandbags.

Back in Gagetown, Marian Langhus is questioning if flood mitigation measures she took at her bed and breakfast after last year’s flooding will be enough this year.

Damage from last year’s record flooding forced her to replace floors and walls at Lang House Bed and Breakfast. They also made changes to allow the water to drain back out.

“Right now we don’t know if we were right or wrong in doing so. Hopefully when the water goes down we’ll see that we were right,” she said.

Despite the flooding, Langhus said she loves the community and has no plans to leave the home she was born in.

“Eleven out of the 12 months of the year it is paradise. It is the most beautiful place. We love it,” she said.

“We are going to continue to do whatever we have to do to stay.”