Risk to U.S. property from severe convective storms as high as from hurricanes: Willis Re

Severe convective storms (SCS) posed as much risk to property in the United States as hurricanes between 2003 and 2015, with the average annual loss from SCS amounting to US$11.23 billion compared to US$11.28 billion from hurricanes. 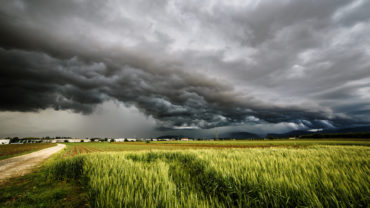 So concludes a new briefing issued Monday by Willis Re, the reinsurance division of Willis Towers Watson (WTW), compiled with Columbia University.

The 2003-2015 figures are based on loss statistics from Verisk Analytics’ Property Claim Services.

The report seeks to increase understanding of the impact of El Niño-Southern Oscillation (ENSO) on tornado and hail frequencies, and to introduce the concept of ENSO-conditioned event rates.

“For the past decade, SCS was the largest annual aggregated risk peril to the U.S. insurance industry,” a WTW statement notes in releasing the briefing, Managing Severe Thunderstorm Risk.

“The persistence of the ENSO state from winter to early spring provides a basis for predicting March-April-May (MAM) SCS activity based on the December-January-February (DJF) ENSO state,” the briefing explains. 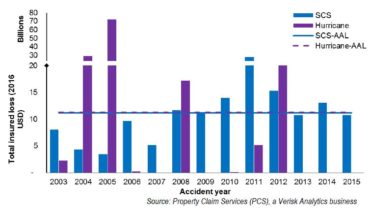 The largest signal is “present in the south and southeast (including parts of Texas, Oklahoma, Kansas, Louisiana, Arkansas and Missouri), except in Florida where the opposite relation is observed,” the briefing adds.

“We see two potential opportunities for taking advantage of the connection of ENSO with severe convective storm activity,” it notes.

“First, based on the state of ENSO in the preceding winter, we can identify regions in advance where SCS activity in spring may be enhanced or reduced. Second, ‘what if?’ scenarios and historical losses can be stratified according to ENSO phase to provide views of risk that account for the ENSO signal,” the briefing adds.

“U.S. severe convective storm activity, as measured by the numbers of tornado and hail reports, was relatively low in 2015 and 2016 compared to previous years,” it notes. 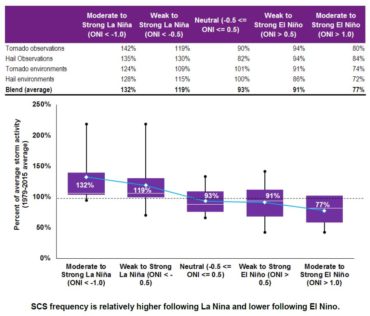 “On an aggregated annual basis, the less intense, more frequent tornadoes and hailstorms cause significant loss to property insurance portfolios,” the report notes.

“ENSO impacts U.S. climate and is the main source of predictability and skill for seasonal forecasts of temperature and precipitation, especially during the cool season (fall and winter),” it states.

Regional variability in increased or reduced severe convective storms frequency due to the ENSO phase “can have a significant impact on regional and single state property insurance companies,” Prasad Gunturi, Willis Re’s executive vice president, says in the statement.

In collaboration with Columbia University, Willis Re is working to develop a climate-conditioned SCS event set for portfolio probabilistic loss estimates, Gunturi reports. “We hope the climate-conditioned view of risk can help companies understand, manage and mitigate the regional and year-over-year variability” in SCS losses, he adds.

“The latest research shows that ENSO and other climate signals modulate the frequency of tornado and hail activity in the U.S.,” Michael Tippett, associate professor in Columbia Engineering’s Department of Applied Physics and Applied Mathematics, reports in the statement.

“We’re excited to be using that research as a scientific basis for making long-range (up to a month) forecasts of the meteorological factors that go along with (SVSs),” Tippett continues.

Using data from Columbia researchers, WTW reports, “Willis Re now plans to produce monthly forecasts of tornado and hail activity for client use.”