Global risk modelling and analytics firm RMS is estimating that the insured losses from Hurricane Maria will be between US$15-30 billion. 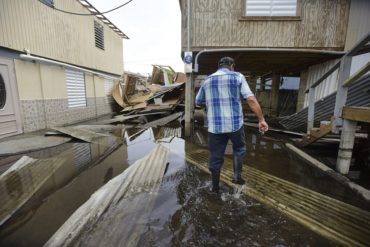 Hector Rosa wades through a flooded area in the aftermath of Hurricane Maria, in Catano, Puerto Rico, Wednesday, Sept. 27, 2017. A week since the passing of Maria many are still waiting for help from anyone from the federal or Puerto Rican government. But the scope of the devastation is so broad, and the relief effort so concentrated in San Juan, that many people from outside the capital say they have received little to no help. (AP Photo/Carlos Giusti)

RMS said in a press release on Thursday that the estimate represents the insured losses associated with wind, storm surge and inland flood damage across the Caribbean, with Puerto Rico and Dominica suffering the most widespread destruction.

“The Caribbean was hit hard by Maria, but Puerto Rico bore the brunt of insured damage,” Michael Young, RMS head of product management for U.S. climate models, said in the release. “It may have avoided the worst impacts of Hurricane Irma at the start of September, which only glanced the island. However, with Maria, Puerto Rico suffered a direct and costly hit,” Young said, noting that “significant amounts of property damage will not be insured, and this will limit industry losses.”

RMS added that it has had “detailed discussions” with insurers on the island, who report that in those urban areas with higher rates of insurance penetration, structural damage may be more limited. Instead, the most catastrophic impacts may have been in areas with very low insurance coverage, according to these sources. This is one reason why RMS expects insured losses from Hurricane Maria to be significantly lower than overall economic damages, which will be between US$30 and US$60 billion across the Caribbean.

Flooding has also washed away roads and bridges.

There are also amplifying effects on industry losses. Hurricane Maria severely impacted power supplies, with outages that will last months and fuel for electricity generators is running short, the firm reported. As well as being a humanitarian concern, this will have implications for Puerto Rico’s economy, with significant business interruption, including to the island’s important pharmaceutical industry.

“RMS clients are reporting that structural damage on Puerto Rico of key industrial complexes is relatively limited,” Young said in the release. “But the electricity shortages, significant infrastructure disruption, and possible labour shortages, are expected to amplify direct losses by almost 50 per cent, which is reflected in our estimate.”

In addition, RMS expects there may be shortages of claims adjustors and reconstruction workers, following the dual impact of earlier Hurricanes Irma and Harvey on the Caribbean and the U.S. mainland. Along with the significant interruption of transmission and distribution systems, this may lead to a unique “Super Cat” situation.

Hurricane Maria was the thirteenth named storm of the 2017 North Atlantic hurricane season, first making landfall over Dominica on Sept. 19 as a Category 5 hurricane, maintaining its intensity as it tracked across the Caribbean near to Guadeloupe, Martinique and the U.S. Virgin Islands before weakening to Category 4 strength as it made landfall in Puerto Rico.

The widespread failure of wind measuring stations due to storm damage made real-time ground observations sparse – a major hurdle for the industry’s assessment of hurricane impact. RMS reported that it was able to overcome this challenge and “build a realistic and representative picture” of the wind field, including the location of Maria’s maximum winds, using its proprietary RMS HWind system. Young explained that HWind draws upon tens of thousands of wind observations from over 30 land, sea, satellite and airborne data sources. The service allowed RMS to estimate maximum sustained winds of 209 km/h as Hurricane Maria made landfall on Puerto Rico.

As of Monday afternoon, the confirmed toll from Maria across the Caribbean was 49 deaths, including 16 dead in Puerto Rico and 27 on the island of Dominica, the Associated Press reported earlier this week.