Saskatchewan’s Ministry of the Economy announced on Friday that it will be implementing a province-wide inspection of all oil pipelines that cross Saskatchewan rivers or lakes where a potential failure could pose a threat to municipal water supplies. 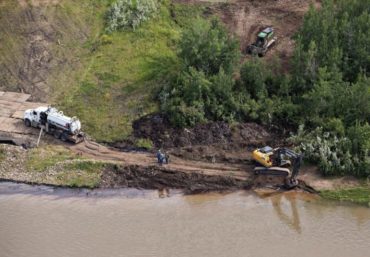 The Ministry of the Economy said in a statement that the inspection program is in response to public concern over the safety and integrity of municipal water supplies in the wake of the July 21 spill at a Husky Energy facility on the North Saskatchewan River that affected several communities.

“The specific cause for the July 21 spill is still undetermined at this point, and we cannot speculate on the factors involved in that incident,” Energy and Resources Minister Dustin Duncan said in the statement.  “However, this does not prevent us from being proactive in our role as the provincial regulator of this industry and responsive to public concerns. Pipelines remain the safest and most environmentally sound method for transporting oil to refineries. As a regulator, we will continue to work with our partners and stakeholders in making sure that they are operated to the highest standards.”

The water crossing inspections that are currently underway will include a physical assessment of each crossing, starting with the North Saskatchewan River and then expanding to other watercourses, the ministry reported. The provincial government will also be collaborating with the National Energy Board, which is responsible for regulating all of the pipeline crossings on the South Saskatchewan River.

Along with the physical inspections of each crossing, the ministry will be working with the operators of these pipelines to ensure that the pipelines are being maintained to the appropriate regulatory standards. Where issues are identified, licensees will be directed to take action to address them.

The spill that prompted the inspection program dumped up to 250,000 litres of oil mixed with a lighter hydrocarbon into the river near Maidstone, Sask., the Canadian Press reported at the time. Last month, the city of Prince Albert, which was forced to close its water intakes along with the city of North Battleford, received a $5-million payment from Husky Energy to help cover direct costs and indirect losses.

In late July, the Canadian Press reported that Husky Energy “knew something might be wrong” with one of its oil pipelines about 14 hours before it told the Saskatchewan government of the leak. In an update posted to its website, the company said that its monitoring detected “pressure anomalies” as several segments of the pipeline were being returned to service, a common occurrence when pipelines are started up. Crews were sent to check the pipeline, but did not find a leak.