MILLTOWN, N.L. – Police have taken one person into custody after the local school, town hall and police station all caught fire in a small community on Newfoundland’s south coast. 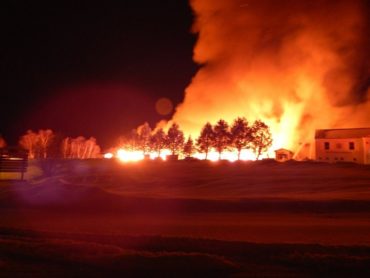 The school in the community of Milltown-Head of Bay d’Espoir on Newfoundland’s south coast appears to be destroyed, according to Deputy Mayor Clarence Kelly. Credit: VOCM.

RCMP Cpl. Trevor O’Keefe said calls started coming in at about 4:40 a.m. local time Tuesday that the town hall for Milltown-Head of Bay d’Espoir was on fire.

A short time later, callers said the local school and RCMP station were also on fire.

“I’m not sure of the damages, but from what I can see the school is bad,” he said. “It looks deliberate.”

O’Keefe said preliminary findings suggest the fires may have been set and police have someone in custody, but offered no further details.

Deputy Mayor Clarence Kelly said people in the community are in shock, adding that the school appeared to be destroyed.

Melita Kearley, who lives on a hilltop overlooking the bay, said she was awakened at about 5:30 a.m. by her daughter, who called to tell her to get up and look out at the kindergarten to Grade 12 school burning down the hill.

She says she went to her window and saw flames and thick smoke blanketing the area below.

“Oh my God, the smoke was just going in over the hill and the school looked like it was completely burning to the ground,” she said, adding that it appears part of the school was saved.

“I got up and looked out and everything was all ablaze.”

She said the school and town hall were next to each other, but the police station was a short distance away. She said the school serves several surrounding communities and has about 260 students. Both her eight-year-old daughter and son, who is supposed to graduate from Grade 12 this year, attend the school.

“It’s a big loss,” said Kearley, who is married to the mayor who was not available. “It’s your infrastructure – your school and your town office and your police station.”