Prolific severe weather outbreaks in the United States lead to an expected billion-dollar payout for the insurance industry as no fewer than five outbreaks of severe weather impacted portions of the country during February, according to Impact Forecasting’s latest Global Catastrophe Recap. 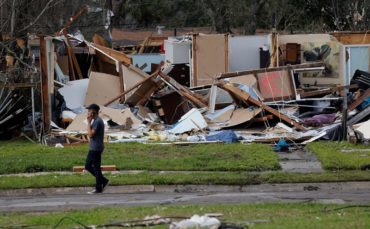 A man walks past a destroyed home in the aftermath of Tuesday’s tornado that tore through the New Orleans East section of New Orleans, Wednesday, Feb. 8, 2017. (AP Photo/Gerald Herbert)

The most prolific event occurred during the end of February and into the first days of March as nearly 60 confirmed tornadoes touched down in the Midwest, Southeast and Mid-Atlantic. One of the tornadoes was the year’s first EF4, with 290 kilometres per hour winds; three others were rated EF3 (estimated wind speeds between 218 and 266 kph), said the report from Impact Forecasting, Aon Benfield’s catastrophe model development team.

Among the hardest-hit states were Illinois, Missouri, Indiana, Arkansas, Kentucky and Tennessee, as up to softball-sized hail and damaging straight-line winds caused “substantial impacts” to homes, businesses, vehicles and other structures. Total economic and insured losses from the singular event were minimally estimated well into the hundreds of millions in U.S. dollars and “very likely to be even higher,” the report said. At least four people were killed and dozens of others were left injured.

In California, significant precipitation throughout much of the state during February prompted the evacuation of 200,000 residents as Lake Oroville reached full capacity and threatened to breach its dam. Subsequent storm systems brought additional rainfall that led to flooding across the state, the report said, adding that at least eight people were killed. Total damage costs were expected well into the hundreds of millions (U.S. dollars).

Elsewhere, a series of powerful thunderstorms tracked through portions of New South Wales, Australia, including the Greater Sydney Metro Area, leading to widespread damage and disruption. The Insurance Council of Australia and local insurers reported that at least 48,000 claims had been lodged with payouts of at least US$250 million, the report said.

In Europe, Windstorm Thomas became the costliest European windstorm of the year so far when it struck western and central Europe, claiming three lives. The storm generated gusty winds of more than 150 kph and caused massive transport disruptions across the British Isles, Benelux and western Germany. Heavy rain and snow was also reported. Preliminary insured loss estimates indicated insured losses separately topping US$105 million in both the United Kingdom and Germany.

Other global events throughout February included:

More News
Related
Saskatoon thunderstorm estimated to cost over US$30 million, floods and convective storms cost global economy US$5 billion in June: Aon Benfield
Southern U.S. crop losses from March storm could exceed $1 billion: Aon
Flooding in Ontario and Quebec in April and May estimated to cost “well into the millions” in U.S. dollars: Aon Benfield
May storms in Ontario, Quebec and the Maritimes caused hundreds of millions in damage and damaged more than 5,200 homes: Aon Benfield