Slow-moving Hurricane Matthew is forecast to make landfall on Haiti’s Tiburon Peninsula around midday on Tuesday as a Category 4 storm, according to the National Hurricane Center (NHC). 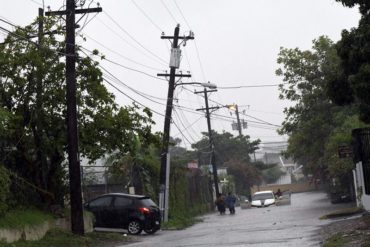 A car tries to cross a flooded street in downtown Kingston, Jamaica, Sunday Oct. 2 , 2016. An extremely dangerous Hurricane Matthew is moving slowly over the Caribbean. It’s following a track that authorities are warning could trigger devastation in parts of Haiti.(AP Photo/Collin Reid)

As one of the most powerful North Atlantic hurricanes in recent history – briefly reaching Category 5 strength on Oct. 1 – Hurricane Matthew is the strongest hurricane in the Caribbean Sea since Hurricane Felix in 2007, Risk Management Solutions, Inc. (RMS) said in a press release on Tuesday.

“Flooding and landslides are a big concern from Hurricane Matthew in the Caribbean, and are likely to be a major contributor to damage from the storm,” said Emily Paterson, head of event response at RMS, in the release. “The slow-moving nature of Matthew is allowing the storm to build up moisture, which can result in heavy rainfall as the system passes over land.”

While Matthew is still a Category 4 major hurricane, the wind-field is relatively small, with hurricane force winds only extending 65 kilometres from the centre. Matthew is making landfall along the edges of Haiti and Cuba, and therefore wind damage is expected to be “relatively localized,” RMS said.

Storm surge from Matthew is another concern. Many of the islands in Matthew’s track have multiple bays, which have the potential to amplify storm surge by not allowing the water to flow away to the side, RMS explained. Furthermore, as Matthew has a fairly linear track, this also amplifies the risk of high waves and storm surge.

RMS said that that they are keeping a close eye on Matthew’s extended four- to five-day forecast, which has the storm tracking very close to the United States coastline off Florida and the southeastern states, before making landfall in the U.S. in the Carolina region at Category 2 strength. 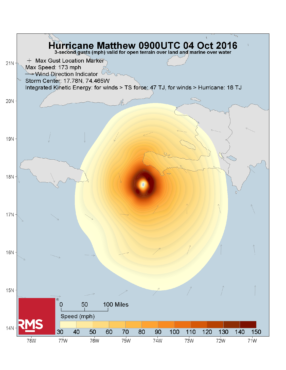 As the storm is moving very slowly, between 15 to 25 inches (380 to 635 millimetres) of rainfall is forecast across southern Haiti and the southwestern portion of the Dominican Republic, with possible isolated amounts of 40 inches (1,015 mm), and a storm surge and large waves could raise water levels as high as 10 feet (three metres) above normal tide levels, RMS said in the release.

Matthew is then forecast to make landfall on Guantanamo Province in southeast Cuba as a Category 4 storm around midnight on Oct. 5, bringing widespread rainfall of eight to 12 inches (205 to 305 mm) to eastern Cuba, with water levels on the south coast expected to rise by seven to 11 feet (2.1 to 3.4 m) above normal tide levels.

After tracking offshore Cuba, the system is predicted to bypass a few miles east of New Providence Island in the Bahamas on Thursday, Oct. 6 as a Category 3 storm, bringing hurricane force winds to the capital, Nassau (pop. ~274,000) and a storm surge of 10 to 15 feet (3-4.6 m) to some Bahaman islands.

This is how they protect their property ahead of #Matthew in Cuba: sandbags & cinder blocks on roofs and tape & cardboard on windows. pic.twitter.com/ZQ6Zs77PTT

Three days later, on Sunday, Oct. 9, the NHC expects Matthew to be over the outer banks of North Carolina as a Category 2 strength storm.

According to catastrophe modelling firm AIR Worldwide, total rainfall from Matthew is expected to be “extremely high” for Jamaica, Haiti and Cuba, which could result in flash floods and mudslides. Storm surge will impact coastal areas also, with three to six feet of surge expected and 10 to 15 feet possible in some areas. Waves riding atop storm surge will exacerbate the impact of the high water, and in some instances storm surge could prevent rainfall runoff, thus intensifying flooding, AIR said in a statement on Monday.

For Jamaica, Hurricane Matthew is the first major hurricane (Category 3 or higher) since Hurricane Gilbert in 1988.

The NHC projects five to 10 inches of rain for Jamaica, with upwards of 15 inches possible in some locales and eight to 12 inches in western Haiti and eastern Cuba, with some regions seeing as much as 20 inches.

Based on RMS reconnaissance trips to the area in 2015 as part of the research conducted to update the RMS North Atlantic Hurricane Model in 2017, the RMS view of vulnerabilities by island is below:

Haiti – The main concern is rainfall, since with steep terrain much of the country is exposed to flooding and landslides, which could be the biggest source of issues in the most populated areas if they aren’t hit by high winds. It is expected that much of the local building stock has been built in recent years, following the 2010 earthquake that devastated the country. The Haitian government instituted a new building code in 2012, in direct response to the earthquake, but it is unclear to what extent this new building code is being enforced. RMS research does, however, indicate that buildings in Haiti are expected to perform worse than most Caribbean islands, although this varies by individual construction type. Insurance penetration in Haiti is expected to be low;

Cuba – While market knowledge of vulnerability in Cuba is low, research into the area by RMS shows that, despite being older on average, the building stock performs well overall due to the high presence of concrete construction. Insurance penetration is also expected to be low;

Jamaica – Building codes in Jamaica have not had a major revision since the first building code was enacted in 1908. However, RMS reconnaissance and research shows that single-family homes are built by local engineers to high standards; reinforced concrete construction is very prevalent across the island. In 2012, Jamaican engineers adopted many practices outlined in recent International Building Code standards, which are likely to be enacted in newer commercial construction; and

Bahamas – Insurance penetration in the Bahamas is understood to be higher than other Caribbean islands, although lower than hurricane-exposed regions of the U.S. However, RMS analysis suggests that the Bahamas, with a long history of building codes, exhibit better construction quality than most of the Caribbean. The predominant construction material is reinforced concrete, although amongst the Family Islands there is a higher proportion of wood construction, leaving these islands potentially more vulnerable to wind damage. Despite being well attached to the walls, roofs in the Bahamas often feature asphalt shingles, which can increase the vulnerability of the roof and the entire structure. RMS reconnaissance shows that insured property accounts for less than 40% of all homes; one estimate places single-family dwelling insurance penetration at near 20%. Commercial exposures are more likely to be insured than residential exposures.

Hurricane #Matthew is threatening sections of the Caribbean including #Jamaica with heavy rain and strong winds. Video: @ebonii876/Instagram pic.twitter.com/09k10O18UU

Pilot's radar display right before passing through the eye of Cat 4 #HurricaneMatthew at 7,000ft. pic.twitter.com/JDl6IICbuz