Areas in the south and central interior of British Columbia remain under evacuation alert or evacuation order after recent flooding events and there is potential for increased snowmelt and further precipitation and flooding next week, the provincial Ministry of Transportation and Infrastructure warned on Sunday. 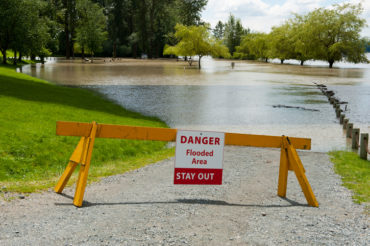 The ministry reported in a statement that disaster financial assistance (DFA) is also now available to eligible British Columbians in the central region who may have been impacted by the flooding that began on May 4. DFA is available to homeowners, residential tenants, small business owners, farmers, charitable organizations and local government bodies who are unable to obtain insurance to cover these disaster-related losses.

In a separate statement on Saturday, the transportation and infrastructure ministry confirmed that the province is experiencing increased snowmelt and precipitation in the central and southern interior portions of the provinces, increasing the risk of landslides in those areas.

Some pictures of Kelowna flooding. This is Marshall St. Localized flooding in a number of areas throughout the Central Okanagan #bcstorm pic.twitter.com/AubJI93d3v

The Canadian Press reported on Monday that an urban search and rescue team from Vancouver was searching for a 76-year-old man whose home north of Salmon Arm was “completely enveloped” in a mudslide on Saturday. And on Sunday, the Canadian Press said that 59-year-old Cassidy Clayton, a fire chief in the B.C. village of Cache Creek, remains unaccounted for two days after he was believed to have been swept away by a swollen waterway west of Kamloops.

Central Okanagan Emergency Operations said in a press release on Monday that an evacuation order has been expanded to include about 20 properties at 415 Commonwealth Road in Kelowna. A new evacuation order has been issued for five units at 720 Commonwealth Road. Previously issued evacuation orders and alerts continue to be in effect for three properties on the Okanagan Indian Band IR#7 (order); 24 other properties in Kelowna (order); the Fintry Provincial Park in the Regional District of the Central Okanagan (order); and and for approximately 90 properties in the Fintry Delta area, just south of the provincial park (alert).

Declarations of local states of emergency remain for the City of Kelowna, the City of West Kelowna and for the Fintry Delta region to address flooding.

this is what the communal park in my town looks like right now bc of the flooding pic.twitter.com/2T9NsoXUsY

Flooding seems to be particularly bad in area of Richter and Rowcliffe- number of homes and apt. buildings evacuated last night #kelowna pic.twitter.com/HmP0xub6Z1