CRESTLINE, Calif. – A wildfire in the San Bernardino National Forest east of Los Angeles has tripled in size to 7 square miles. 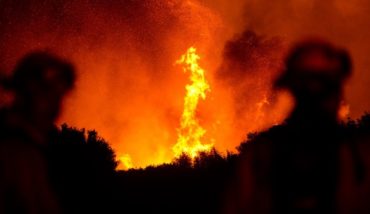 The blaze in the San Bernardino Mountains east of Silverwood Lake and south of the high desert city of Hesperia grew from 1,500 acres on Sunday to 4,500 acres early Monday. Containment is estimated at just 5 per cent.

Some 400 firefighters are working the blaze and more have been ordered.

The fire erupted shortly after noon Sunday. The cause is unknown.

Among other fires in California, the 18-day-old blaze near Big Sur has burned nearly 90 square miles and is 45 per cent contained.

More than 5,000 firefighters are on the lines of the fire, which was ignited by an illegal campfire and has destroyed 57 homes and damaged three others.