A windstorm that affected parts of southern Ontario on March 8 has resulted in nearly $100 million in insured damage, Catastrophe Indices and Quantification Inc. (CatIQ) said on Tuesday in a press release from the Insurance Bureau of Canada (IBC). 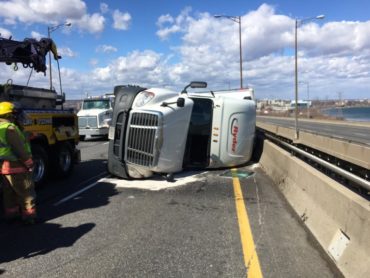 Burlington Skyway closed in both directions due to high winds and a rolled over transport truck. Credit: @OPP_HSD.

On March 8, a low pressure system brought damaging winds to southern Ontario, IBC said in the release. The strongest gusts were felt in the city of Hamilton, with wind speeds nearing 115 kilometres per hour. Other parts of the region received wind gusts in the range of 70-105 km/hr.

The strong winds damaged roofs and caused trees and branches to fall on houses, roads and power lines, the release noted. Approximately 68,000 residents lost power and the Burlington Skyway arch bridge was closed for several hours following a transport truck rollover caused by the wind. A 23-year-old man also died as a result of the storm.

“Windstorms can be a devastating force of nature,” Kim Donaldson, IBC’s vice president for Ontario, said in the release. “They can cause significant damage in a very short amount of time. It is important that consumers take precautions and secure their property in an effort to minimize potential damage. Consumers should also understand their insurance policies and know what’s covered before storms like these, or other catastrophes strike.”