Southern U.S. drought relents but not over, despite recent rains

ATLANTA – Recent showers and storms across much of the South have eased the severe drought in the region, but experts say it wasn’t enough to make up for months of dry conditions before the rain finally fell. 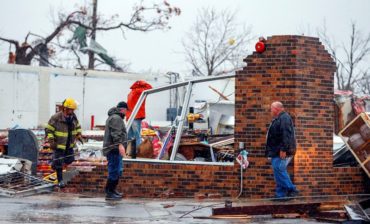 A Rosalie firefighter helps remove debris from the Rosalie Plaza after a tornado ripped through the town, Wednesday, Nov. 30, 2016, in Rosalie, Ala. Storms that spawned deadly winds have dumped more than 2 inches of rain across much of north Alabama, causing floods after months of drought. (AP Photo/Butch Dill)

More rain is needed before the demise of the drought can be declared, said Mark Svoboda, director of the National Drought Mitigation Center in Lincoln, Nebraska.

The rain has helped in the short term, though, and it also helped firefighters to rein in some the large wildfires burning in several southern states, Svoboda said.

The two largest fires in the South, which both began in the north Georgia mountains, are both 95 per cent contained, national fire managers reported. The third-largest wildfire – the blaze in Great Smoky Mountains National Park blamed for 14 deaths when its flames and embers rode high winds into the Gatlinburg, Tennessee area Nov. 28 – is more now more than 80 per cent contained, authorities said in their most recent update.

A new national report on drought conditions is expected to be released later Thursday by the Drought Mitigation Center. The report will show how recent rains have affected various levels of drought in hard-hit states like Georgia, Alabama, Tennessee and others.

Abnormally dry conditions began showing up in March in parts of the South, and became more severe later in the spring, all through the summer and fall, drought maps show.

When looking back six months, large parts of the South have seen only 50 per cent to 70 per cent of their normal rainfall for the period. To make up for such long-term rainfall deficits, “you need sustained rains to sort of gradually work their way down into clay-type soils,” Svoboda said.

With some of the recent thunderstorms, though, “quite a bit of it was heavy so there was a tremendous amount of run-off,” said John Christie, Alabama’s state climatologist. “It just came too fast to soak in.”

Christie looks to the flow of streams as one way of telling him the story of what’s happening with the drought. “I’m seeing many of the streams now fall back below average,” he said Wednesday.

Related: Canadian couple among the dead in Tennessee wildfire

Lakes also remain low. Lake Lanier, a main source of drinking water for metro Atlanta, is nearly 9 feet below its normal full capacity for this time of year, Murphey said.

But the weather pattern is showing some positive signs and moisture from the Gulf of Mexico could soon produce more rains across the South, forecasts show.

“The good news is that the Gulf is opening up and has been opening up,” Murphey said.