Alberta has experienced a disproportionate share of the extreme weather catastrophes in Canada over the past decade, causing insurers to question whether the province is a viable place to do business. 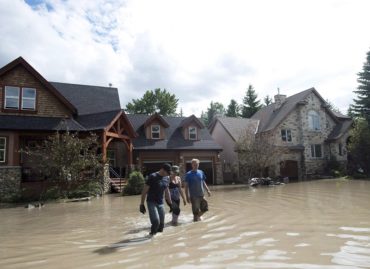 Residents walk through flood waters in Calgary on June 24, 2013. Storms, hurricanes and floods driven in part by climate change will cost the federal disaster fund $902 million a year over the next five years, well above past averages, the parliamentary budget officer predicted Thursday.THE CANADIAN PRESS/Nathan Denette

The question was raised Friday at the C4 conference in Ottawa, where a conference panel discussed why the province’s average home insurance premium soared from $500 to $1,500 over the past decade.

Panelists observed that severe weather events arising from climate change, in addition to a major population boom in the province, have resulted in the Canadian property and casualty insurance industry paying out major losses occurring in the province.

Of the approximately $9 billion that the P&C industry paid out in catastrophe claims over the past nine years, 63% of those losses have happened in Alberta.

“It has to be,” replied panelist Keith Hartry, senior vice president and chief operating officer of Wawanesa Mutual Insurance Company. “People need insurance, so we have to find a way of making it viable.”

Hartry said to make the home insurance product viable, “it’s likely going to mean people will have to accept more exposure themselves than they are used to.” That could take the form of homeowners accepting higher policy deductibles, or risk mitigation measures.

Also, panelists said, governments may need to accept more exposure than they have in the past, likely in the form of more taxpayer funds for disaster assistance programs.

“These [cities] are in the exact area where most of the storm activity is,” Hartry said. “It’s a combination of changing weather patterns, and more people in harm’s way.”

2 Comments » for Is storm-ravaged Alberta insurable?