ELK CITY, Okla. – Storms whipped through a wide swath of the central U.S., forming tornadoes that flattened a Wisconsin mobile home park and an Oklahoma subdivision and killing at least two people and injuring dozens of others. 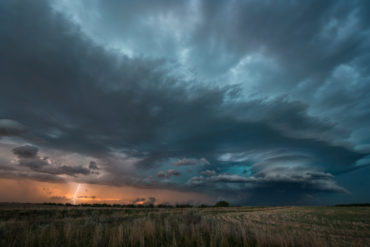 The storms hit Wisconsin late Tuesday afternoon and into the evening, levelling the Prairie Lake Estate Mobile Park near Chetek, which is about 110 miles (177 kilometres) northeast of Minneapolis.

Mark Tyson said he and his wife Robin were huddled behind a living room chair as the storm hit Tuesday evening when an entire wall of their mobile home suddenly came flying at them.

“I thought we were done,” said Tyson. Shards of glass were flying at them like bullets, Tyson told the Eau Claire Leader-Telegram.

“When your house comes apart like that, there’s no place to go. I thought this is it.”

A 46-year-old man was killed at the trailer park and at least 25 other people were injured, according to the Barron County Sheriff’s Department. Aerial footage showed a wide path of levelled mobile homes and debris.

Several poultry barns at a turkey processing plant across the street were badly damaged, and turkeys could be seen wandering in the debris.

Meteorologists said eight suspected tornadoes are believed to have touched down in western Oklahoma, killing a man and destroying at least 40 homes.

National Weather Service meteorologist Rick Smith said two supercells formed in the Texas Panhandle on Tuesday and then moved into Oklahoma. He said the most destructive tornado appears to have remained on the ground for five to 10 miles (eight to 16 kilometres) near Elk City, which is about 110 miles (180 kilometres) west of Oklahoma City.

The weather service said it received reports of more than two dozen tornado sightings Tuesday night across the five states of Texas, Oklahoma, Kansas, Nebraska and Wisconsin. There were also many reports of large hail and strong winds.

Everyone is okay involved in this picture, but the house is pretty much gone after the Elk City, OK, tornado. @NEWS9 #okwx pic.twitter.com/B0GKlkVaXT

In eastern Nebraska, winds damaged homes, farms and businesses and left thousands of people without electricity. Gusts of 85 mph (135 kph) were recorded at the weather service’s office in Valley, west of Omaha. Lightning blew siding and bricks off a home in Lincoln and a funnel cloud was spotted about 40 miles (65 kilometres) southwest of the city, near Exeter, but no damage was reported.

In Iowa, the storms damaged homes and other buildings and knocked down trees, limbs and power poles, leaving thousands of people without power. The Iowa State Patrol said the strong winds knocked over some semitrailers on Interstate 29, which runs north-south along the Missouri River.

The fire department lost power in Missouri Valley, Iowa, which is about 20 miles (30 kilometres) north of Omaha. Fallen power lines and lightning caused fires there, and MidAmerican Energy said Wednesday that several thousand customers were without power.

Baseball sized hail that hit my car during a tornado today in Oklahoma! pic.twitter.com/xkIggfxUbO