NASHVILLE – Deadly wildfires caused more than $500 million in damage as they tore through a tourism community in the foothills of the Great Smoky Mountains and killed 14 people, local officials estimated Tuesday. 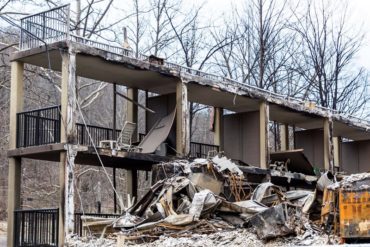 The balconies of a burned-out resort are seen in a heavily damaged neighborhood in Gatlinburg, Tenn., on Friday, Dec. 9, 2016. The resort town reopened to the public for the first time since wildfires on Nov. 28. (AP Photo/Erik Schelzig)

Sevier County Mayor Larry Waters put a dollar figure on the damage for the first time at a news conference Tuesday, where officials also defended their emergency response in the Gatlinburg area and promised to conduct wide-ranging reviews of what can be done better.

The fires blew into the city on Nov. 28 on gusts around 87 miles per hour that knocked down power lines and started other fires. People fled the city on foot or by car as walls of fire closed in.

In the aftermath of the Gatlinburg, TN fire, @SamaritansPurse volunteers are helping families who lost their homes. pic.twitter.com/JPkNRBxwHq

The fires harmed more than 2,400 buildings in the Gatlinburg area, including more than 2,100 homes and almost 60 businesses destroyed, officials have said. For the first time since the fires, Gatlinburg officially reopened to the public Friday, and its main downtown district was largely unharmed.

“It was a great sight, a beautiful sight, to see this weekend our streets once again filled with visitors and locals alike,” Gatlinburg City Manager Cindy Cameron Ogle said.

Great Smoky Mountains National Park officials defended the way they fought the fire, which started Nov. 23 at just 1 1/2 acres in a remote part of the park and travelled 5 1/2 miles to singe Gatlinburg five days later. Two juveniles have since been charged with aggravated arson in that fire in the park.

The embers either hopped around, starting new fires that dropped more embers, or the embers somehow sailed airborne for miles. That happens in extreme conditions in the West, but it’s “nearly unheard of” in the East, said Park Deputy Superintendent Clay Jordan.

Related: Canadian couple among the dead in Tennessee wildfire

“First, we believe there was no way we could have controlled the fire prior to the wind event,” Jordan said. “And second, the reality is that we believe that no number of firefighters or fire engines could have stopped the spread of the fire in such extreme wind conditions.”

Hello I need followers for my campaign for Sevier County TN. displaced animals from the #Seviercountywildfires #gatlinburgfire pic.twitter.com/XA19gDTuxj

Miller said TEMA tried to reconnect to get approval of the language of the alert, but couldn’t, and didn’t send the message because the wording wasn’t approved.

“That’s important to note because we didn’t want an inappropriate message to be disseminated which could have evacuated people toward an area of concern, rather than away from it,” Miller said.

Fire raged around both sides of the #Gatlinburg Sky Lift – parts of Westgate resort are leveled @NC5 pic.twitter.com/UuyMKhfykk

Sevier County Mayor Larry Waters said officials at all levels will evaluate their response and determine what can be done better. He said everything is on the table but also said, “We couldn’t anticipate this kind firestorm. I don’t think anybody could.”

#Update : Pensacola couple that got stranded in Gatlinburg b/c of the fire is now home safely. Shared this pic of their car @weartv #C3N pic.twitter.com/2MgvkVCzev

At least 14 people have been killed and over 1750 structures have been destroyed or damaged by wildfires in Sevier County. #Gatlinburg pic.twitter.com/wVn9lks2Fq

I was born in Sevier County and this is absolutely heartbreaking. But the people here are resilient and will rebuild. #PrayForTheSmokies pic.twitter.com/qx5UrploXD