The burning question: where is Canada’s national wildfire plan? 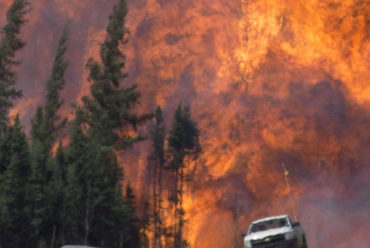 A wildfire rips through the forest 16 km south of Fort McMurray, Alberta on Highway 63 on May 7, 2016. THE CANADIAN PRESS/Jonathan Hayward

It’s been three years since the wildfires in Fort McMurray, Alta., for which the Canadian P&C insurance industry paid out more than $3.7 billion in insured damage. Scott Thomas, Toronto-based vice president of risk services at Zurich Canada, believes not enough has been done since then to implement change in terms of preparedness, co-ordination and prevention. Sometimes politics get in the way and such priorities fall off the table, he said.

“Are we co-ordinated from the insurance perspective?” he asked during an interview with Canadian Underwriter at the Risk Insurance Management Society Canada Conference in Edmonton recently.

“The reality is, moving forward, we have to get better because the fuel in the forest continues to grow,” he said, meaning that trees and bushes are getting thicker. It’s easier for fires to spread where there are more and bigger trees to burn. “If you look at the landscape 100 years ago, it was very different.”

At the conference, Zurich presented its report on the Fort McMurray wildfire, the first such report that the company has done on a Canadian catastrophe. The report praised first responders, community resilience, and the general success of averting a much worse situation. That said, Thomas believes efforts have to improve for future events.

Sitting still is not an option, agrees Paul Kovacs, the Institute for Catastrophic Loss Reduction’s executive director, who helped produce the report.

The report found that insurance companies worked well with the provincial and local governments. That bodes well for the future, but it shouldn’t take until the next disaster for the sides to come together, forcing them to come up with a response plan on the spot.

“There should be a place where they’re talking about this right now,” Kovacs urged. “Get ready for the next fire. There should be some structure so that fires are discussed cooperatively among the different people that need to be involved. Set it up now before the next fire, and chat about what you’re going to do to kick into gear when the next fire happens.”

Both Thomas and Kovacs advocated for a national strategy on wildfires. The idea is nothing new, but it hasn’t really developed into something meaningful yet. As part of a plan, they would like to see building codes upped to include fire-resistant materials.

“There are 50 states and 10 provinces and three territories [in North America], and only one has a wildfire building code – California,” Kovacs pointed out. “Does it cost much more? I don’t think so. Let’s talk about that and decide, so we can have a real decision.”

Discussing lessons learned is nice, but it’s moving forward that is most important, Thomas stressed. “We really have to be coordinated in our efforts,” he said. “OK, we’ve written the paper. What do we do now?”

1 Comment » for The burning question: where is Canada’s national wildfire plan?