How much will the eastern Canada flooding cost?

Total economic losses from the recent flooding in Ontario, Quebec and New Brunswick are expected minimally to reach into the hundreds of millions of dollars (U.S.), Aon’s latest catastrophe report said. 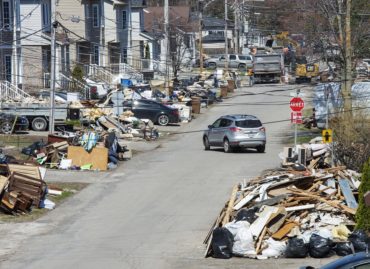 Debris lines a street as clean up continues in parts of Ste.Marthe-sur-la-Lac, Que., Monday, May 6, 2019. A dike broke last week causing widespread flooding and forcing thousands of people to evacuate. THE CANADIAN PRESS/Ryan Remiorz

“Due to the relatively low overland flood insurance take-up, a sizeable portion of the economic cost was expected to be uninsured,” said the Global Catastrophe Recap for April, released Thursday by Aon’s Impact Forecasting cat model development team.

According to the Insurance Bureau of Canada (IBC), the take-up rate for overland flood insurance in Quebec was about 33% in 2017. Statistics for Ontario and New Brunswick were not available by press time.

Flooding occurred in late April and early May. The combination of increasing temperatures and heavy rainfall during the second half of April and extending into May exacerbated the seasonal spring flood situation across the St. Lawrence, Ottawa and St. John River basins, the Aon report said. These river overflows led up to 10,000 homes incurring flood inundation, with most of the worst impacts registered in southern Quebec.

In late April, water from the Lake of Two Mountains burst through a natural dike in Ste-Marthe-sur-le-Lac, inundating the suburb west of Montreal. Many homes flooded in the suburb will be total losses and may not have overland flood coverage, Michel Lachelle, vice president of organizational services in eastern Canada for ClaimsPro/IndemniPro, said May 1. The adjusting firm was involved in about 2,000 flood claims from April in Quebec alone, Lachelle said at the time.

The Canadian Press reported Friday that “water levels are expected to rise again this weekend between Ottawa and Montreal, even as New Brunswick’s floods are effectively over.” The City of Ottawa, which has been in a state of emergency since Apr. 25, confirmed water levels are expected to rise in the city. Water levels to the west of Ottawa (between Mattawa and Lac Deschenes) will also rise this weekend and the peak could exceed maximum levels earlier this spring, and even previous historical highs.

1 Comment » for How much will the eastern Canada flooding cost?