Is wind “the new water” for Canada’s insurers?

High winds contributed in part to most catastrophes in Canada over the past few decades, prompting the need for a new national standard on wind resilience, the Institute for Catastrophic Loss Reduction (ICLR) said Thursday.

A report released by ICLR and the Standards Council of Canada is recommending the development of a new national standard of Canada on wind resilience to mitigate residential and small building property damage from natural disasters. 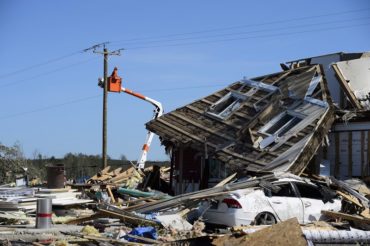 More than 210 catastrophes – events that caused insured damage of $25-million or more – swept through Canada between 1983 and 2017, according to the Insurance Bureau of Canada (IBC)’s 2018 Facts of the Property and Casualty Insurance Industry of Canada. One hundred and thirty-five (about 64%) of them had some form of wind component, such as a windstorm, tornado, storm or hurricane, ICLR reports.

The costliest insured loss event of 2018, more than $622 million as of early February, was a windstorm, according to Catastrophe Indices and Quantification Inc (CatIQ). On May 4-5, 2018, wind gusts of up to 126 km/h struck southern Ontario and Quebec, knocking out power for 600,000 hydro customers. Combine that with the tornadoes in those two provinces last September and insured losses from just those two wind events were close to $1 billion – about half of the approximately $1.9 billion in total insured losses for the year.

Dan Sandink, director of research at ICLR (and one of the report’s authors), told Canadian Underwriter Thursday that the report is intended as a foundational document that will serve as the basis for a national standard on wind resilience. “This is a first, but significant step in the process,” he said.

Regulation would come at a later date, after measures proposed in the report have worked their way through rigorous code development processes. The ICLR report proposes measures in four major categories:

The measures emphasize protection of roofs, which are particularly exposed to damage from high winds. In general, roofs built using pre-fabricated, engineered trusses are considered to be more resistant to high wind impacts, and therefore a preferred option.

Slightly thicker roof sheathing – combined with specific nails spaced apart at a certain distance along both the edges of the sheathing panel and along the interior supports – is also recommended to reduce the risk of damage associated with sheathing failure. “Roof sheathing may be pulled off of buildings during high-wind events, resulting in significant water intrusion into the attic and home,” the report noted.

Many standards and guides include provisions related to wind resistance for homes, including the National Building Code, Sandink said. “However, this is the first report that addresses the topic exclusively and draws on a significant body of recent research conducted in Canada and North America, including post-disaster wind investigations, that have identified very specific vulnerabilities in home construction.”

1 Comment » for Is wind “the new water” for Canada’s insurers?