Tornadoes cause serious damage in Kansas

EUREKA, Kan. – Tornadoes ripped through southeast Kansas late Thursday, causing widespread damage in a small town, though no injuries have been reported.

The National Weather Service said Friday that preliminary data show that an EF2 tornado on Thursday night struck Eureka, a town of roughly 2,600 residents about 60 miles east of Wichita. The tornado damaged about 50 homes and businesses, including the Eureka Nursing Center, which lost its south and west-facing walls, The Wichita Eagle reported. The weather service said another EF3 tornado hit northwest of the town, according to the early data.

Residents of the nursing home took shelter in the facility and were likely to be moved to a different facility on Friday. 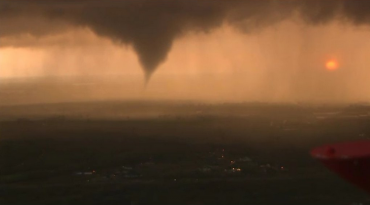 Levi Vinson, the Greenwood County emergency management director, said everyone has been accounted for, but crews were still “checking on some people.”

The weather service alerted Eureka’s residents to the incoming storm at least 15 minutes before the tornado hit, he said.

“We were notified and we sounded the emergency alert outdoor warning sirens,” Vinson said. “The leeway they provided us, I think, is what benefited us on the lack of injuries.”

Kevin Darmofal, a meteorologist with the weather service in Wichita, said a damage survey team would likely be in Eureka early Friday.

Also Friday, the state adjutant general’s office said in a release that Gov. Sam Brownback has signed a state of disaster emergency declaration for Greenwood County. The declaration allows the state to use its resources and personnel in response to the tornado, which the office said damaged about 50 homes and businesses and also left scores without power throughout the county.

Kelly Johnson, a nurse who works at the nursing centre, drove from her home in Wichita to Eureka after hearing reports of the storm. She climbed over debris to enter one of the facility’s hallways, where she visited some residents.

“I just checked on one of the residents who is 100 years old,” Johnson said. “She was sleeping. People always said that Eureka is in a valley, so it wouldn’t get hit by a tornado. When I heard, I had to come.”

Information from: The Wichita (Kan.) Eagle