Tornadoes suspected in violent N.B. storm: ‘It came without any notice’ 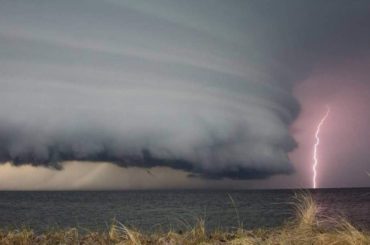 At the height of the storm, about 7,000 NB Power customers were without power. Photo: @AndreMonette_MM.

“They were expecting some thundershowers, but nothing of that magnitude so it came without any notice and suddenly so luckily nobody was injured,” said Robert Duguay, a spokesman with the province’s Emergency Measures Organization.

One video on social media showed big chunks of roofing swirling through the air as a large grey cloud hovers above in Caraquet.

Christelle Paulin, who shot the video, can be heard muttering, “Oh my God,” repeatedly in disbelief.

“It started very fast. All of a sudden there was a big cloud coming very fast and then the wind started — very strong. The roof started falling off the building,” Paulin said Friday in an email interview.

“For a minute we were very scared, wondering if we were safe here or not. It was the first time that I saw a storm that strong.”

Another video shows a car getting blasted by dirt whipped up from winds on a road, as an expansive storm cloud passes overhead.

“It was definitely very strong and they are suspecting tornadoes or other kind of severe weather that hit in a very short time,” said Duguay.

A business in Caraquet lost a lot of its roofing tiles, allowing water to get in and damage goods inside, he said.

Claude Cote, a meteorologist with Environment Canada, said the tiles were made of concrete, but were being tossed in the wind like playing cards.

The causeway and bridge linking Lameque and Miscou islands to Shippagan was closed to all traffic except emergency vehicles due to more than a dozen power lines that were knocked down and laying across the sole link to the mainland.

“They all collapsed like dominoes on the road,” Duguay said. “To see such damage on the bridge, I never saw that before.”

The potent system unleashed fierce winds, lightning and then downpours on a wide swath of the Acadian Peninsula starting at about 8 p.m. Thursday.

Cote said the combination of a cold front meeting unusually warm air temperatures that reached 30 C, along with cold water temperatures, made for a doozy of a system that came on quickly and with intensity.

He said they are still gathering evidence, but suspect the clouds may have contained tornadoes that produced winds that reached gusts of 130 km/h.

“These are all factors that did trigger some very intense thunderstorm activity,” he said from Fredericton. “It’s very unusual for May 18. Typically, we would see this kind of drastic thunderstorm activity in July or August, and yesterday we had record-breaking temperatures.”

NB Power said the storm caused extensive structural damage on the peninsula, with the bulk of the outages on Lameque Island and Caraquet.

At the height of the storm, about 7,000 customers were without power but crews managed to restore about 2,500 of those despite thunder and lightning through the evening. By midday Friday, about 4,000 customers were still without electricity.

Spokeswoman Marie-Andree Bolduc said 20 crews from across the province were working to remove the downed poles and repair other lines in the area, which was hit hard last winter by a powerful storm that similarly felled poles and knocked out power.

She said they were surveying the area with a helicopter and also ensuring that hospitals, nursing homes and fish plants in the Lameque area had access to generators, but it wasn’t clear when power would be restored on the islands.

The province’s Emergency Measures Organization said the bridge between Shippagan and Lameque could remain closed until Saturday.

– By Alison Auld in Halifax