TORONTO – Steady rain and thunderstorm warnings in Toronto on Tuesday had residents bracing for waterlogged streets and transit delays for the third time in as many weeks, with the city saying it was prepared to respond quickly to urgent needs.

The issues the city faces during periods of heavy rainfall are complex, observers said, noting that Toronto’s density and decades-old sewer system are among the main challenges during extreme weather.

“When you have really short intense storms, the rainfall overwhelms our infrastructure capacity and we end up with excess water at the surface,” said Jennifer Drake, a civil engineering professor at the University of Toronto.

Since the beginning of August, more than 148 millimetres of rain has fallen onto Toronto, according to Environment Canada. 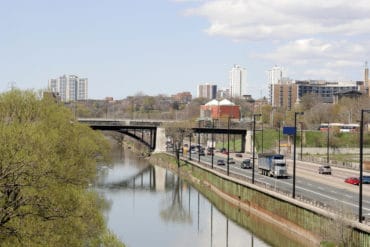 “In the past, when it was rural, agricultural and forested, most of that rainwater infiltrated into the ground or evaporated,” said Drake. “We lose those processes as a result of city building and we end up generating a lot more surface runoffs that then turn into flood water.”

Lou Di Gironimo, interim deputy city manager in Toronto, said the sewer system in Canada’s most populous city acts like a “bathtub” and can get overwhelmed during heavy rainfall.

In order to prepare ahead of a storm, Di Gironimo said the city encourages residents to use Toronto’s basement flooding protection subsidy program, which offers owners of single-family, duplex and triplex residential homes a subsidy of up to $3,400 per property to install flood protection devices.

The money will be split between a basement flooding protection program to improve sewer capacity and a plan to improve the quality of stormwater released to the city’s waterways.

Last year, the City of Toronto Act was also updated to allow green roof bylaws to be passed. A study conducted by the University of Toronto that was published in 2017 showed that green roofs have the capacity to capture an average of 70 per cent of rainfall over a given time, relieving underground stormwater systems and ultimately releasing the rain water back into the atmosphere.

There are many ways for the city to reduce flooding, said Drake, but most of them are extremely costly. And although some flooding is preventable, some of it is unavoidable, she said.

Toronto’s downtown core, which is at the same level as Lake Ontario, has some areas more prone to flooding, she noted.

“Some of the ways that we planned our city in the past, we did not really understand flooding as a process and how to predict it,” she said, pointing to the fact that a major expressway running through the core was built right next to a waterway. Underpasses are often a point where water pools during heavy rains.

“There is nothing we can do to prevent this from happening a couple of times a year,” she said.

One of the less costly implementations Drake suggested is a stormwater utility charge, which increases a water bill based on how much stormwater a property generates that the city has to then manage. Other cities, such as neighbouring Mississauga, Ont., have implemented the approach.

“It can serve as a revenue tool to fund the really large infrastructure projects that we really need to address some of these extreme events,” Drake said.