A US$700 million pre-tax hit for catastrophe losses in 2017 Q3 contributed to Travelers Companies, Inc. seeing both its net income and core income drop compared to the prior-year quarter. 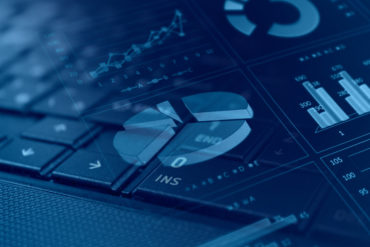 “The decrease in net income and core income was primarily due to significantly higher catastrophe losses,” the insurer noted in a statement Thursday.

More positively, “net income benefited from an increase in net realized investment gains of US$61 million pre-tax (US$40 million after-tax) in the current quarter, primarily driven by gains on the sale of equity securities,” Travelers reports.

This compares to “US$23 million pre-tax (US$15 million after-tax) in the prior-year quarter,” the insurer adds.

Looking at financial results for the first nine months of 2017, Travelers’ net income was again down – although not as dramatically – at about US$1.5 billion compared to almost US$2.1 billion for the same three quarters of 2016.

This was “due to lower core income, partially offset by higher net realized investment gains,” the company statement notes.

Core income for the nine months of 2017, too, decreased, with Travelers posting US$1.4 billion compared to about US$2.0 billion for the same period in 2016. 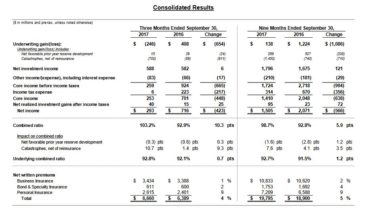 Net written premiums (NWP) amounted to almost US$6.7 billion for the three months ended Sept. 30, 2017 compared to approximately US$6.4 billion for the same quarter of 2016, an increase of 4% and with growth in all segments.

Results were less favourable with regard to combined ratio and return on equity (ROE) in 2017 Q3 compared to 2016 Q3.

“Catastrophe losses in the third quarter of 2017 primarily resulted from hurricanes Harvey, Irma and Maria, as well as wind and hail storms in the Southern region of the United States,” the insurer reports.

In a quarter of unprecedented hurricane activity, Travelers chairman and CEO Alan Schnitzer says, “our disciplined coastal underwriting stood up to the storms, and we also delivered a consolidated underlying combined ratio of 92.8%, with all three segments contributing to the solid result.”

“In our commercial businesses, retention remained at historic highs, renewal premium change remained positive and consistent with recent periods and the level of new business increased,” he reports.

“In Personal auto, renewal premium change reached double digits in September, consistent with our plans to improve profitability, and we maintained the positive momentum in our homeowners business with 5% growth in policies in force quarter-over-quarter,” Schnitzer adds.

Related: Hurricanes to date a capital event for reinsurers, 2017 could be even more costly Cat year than 2005