Eleven years after the Sunrise Propane explosions in north Toronto that forced the evacuation of about 12,000, no one seems to know exactly what caused that accident or what the total damage was, an Annual Engineering Insurance Conference speaker suggested Thursday.

“I don’t know that we will ever know exactly what that ignition source was – whether it was a switch or relay in the truck,” said Rob Sparling,  senior vice president at 30 Forensic Engineering. “It could have been a resident across the street turned on their exterior light. It could have been anything.  We just don’t know.”

The explosions happened shortly before 4:00 in the morning on Aug. 10, 2008 at the facility on Murray Road, south of the Bombardier Aerospace facility at the Downsview airfield. 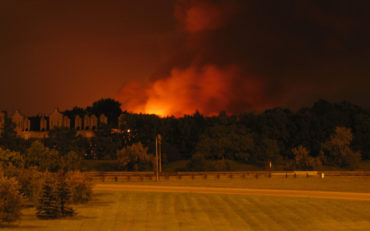 The Sunrise propane explosion in 2008 as viewed from overpass of Keele Street over Highway 401.
Originally posted to Flickr by Michael Gil. Courtesy of Wikimedia Commons

Damage such as blown-in garage doors was visible on homes as far has 500 metres away, Sparling said Thursday.

The explosions happened after a Sunrise Propane worker was transferring propane from one truck to another. Sunrise would send one truck to Sarnia to pick up propane and then transfer that fuel to smaller trucks that would make deliveries in the Toronto area.

The Ontario Office of the Fire Marshal concluded a problem with the hose assembly or pumps must have caused propane to leak, said Sparling, 30 Forensic Engineering’s practice lead for materials and product failure, piping and HVAC, during his presentation at the 46th annual AEIC. But there are competing theories on the cause because other investigative bodies also looked into it – including forensic experts, the Toronto Police Service, the provincial labour and environment ministries as well as the Technical Standards and Safety Authority, which prohibits truck-to-truck transfers of propane.

Why the propane actually ignited remains a mystery.

AEIC was produced by the Canadian Boiler & Machinery Underwriters Association and held at Vantage Venues in Toronto.

Killed in the 2008 explosion was Parminder Singh Saini, a part-time Sunrise employee.  It also claimed the life of a first responder – Bob Leek, Toronto Fire Services District Chief of Emergency Planning – who suffered a heart attack at the scene while responding to the explosion.

About 12,000 residents within a 1.6 kilometre radius were evacuated in the middle of the night, wrote Justice Leslie Chapin of the Ontario Court of Justice in Ontario (Ministry of Labour and Ministry of the Environment) v. Sunrise Propane Energy Group Inc. et al., released in 2013. In that ruling Sunrise and directors and officers were found guilty of several provincial offences and fined more than $5 million. Among other things the firm was found guilty, under the Occupational Health and Safety Act, of failing to provide information, instruction and supervision to a worker to protect the health or safety of the worker and failing to take every precaution reasonable in the circumstances for the protection of a worker.

Damage to neighbouring residences included shattered windows, blown-in garage doors and structural damage to walls, ceilings and roofs, Justice Chapin wrote. Some homes were rendered uninhabitable for over a year and some residents suffered lost wages, while two local elementary schools suffered structural damage, she wrote. There was also some asbestos contamination.

“If it was a little bit bigger, a lot of those houses wouldn’t be standing,” Sparling said Thursday of homes in the area near the propane facility, suggesting the accident could have killed a lot more people.

An AEIC audience member asked Thursday about total dollar loss from the tragedy.

“I don’t think we have a good idea of the exact direct damages,” replied Sparling, noting none of the property damage for Sunrise, which ceased operations, was calculated or documented.

Direct damage to neighboring area would be less than $7 million, said Sparling, noting a class-action lawsuit was settled out of court.

The explosion was so large it got picked up on seismographs and air pressure monitors hundreds of kilometres away in Ontario, Quebec and the Northern United States, said Sparling.