ELKO, Nev. – An earthen dam failed in a rural area of northeastern Nevada and caused flash flooding that threatened homes, sent waters over low-lying roads and farms and forced the rerouting of trains, officials said. 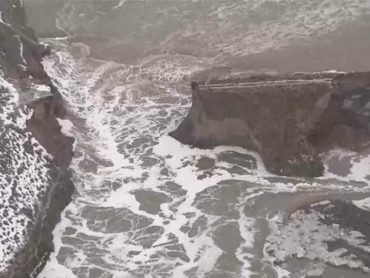 The National Weather Service said Wednesday night that the flash floods posed possibly life-threatening situations for rural residents, but there have been no reports of any injuries.

The weather service told the Elko Daily Free Press that there were reports of at least 2 to 3 feet of water rapidly moving downstream, and the depth of water could increase.

The rural area affected is situated is near the Utah border and about 30 miles northeast of Wells, a key Nevada city along Interstate 80.

The weather service said that a full breach and failure of the 21 Mile Dam was sending water spilling out in a “dangerous and life-threatening situation.”

Las Vegas station KLS reported water flowing in some streets of Montello, a small community in Elko County, had emergency crews responding to set up sand bags around homes and businesses.

Kevin Hall, a captain with the East Elko Fire Protection District, told the station that the flooding and the breach were due to heavy runoff and snowmelt.

The National Weather Service in Elko has extended the flash-flood warning until midnight Thursday.

Significant flash flooding was reported in Montello and authorities have closed State Route 233 from Interstate 80 at Oasis to Montello.

A postal spokesman for Nevada tells the Elko Daily Free Press that workers were able to retrieve all the mail from the Montello Post Office. The building was “swamped,” he said.

Elko County Sheriff Jim Pitts said that basements have been flooded in Montello.

The weather service advised people in the area to move to higher ground and to avoid flooded roadways. Officials said most flood deaths occur in vehicles.

Officials say the railroad tracks at Montello, Nevada, are flooded.

Justin E. Jacobs, a Union Pacific Railroad spokesman, tells The Associated Press that advance warning helped the company reroute any trains before they were near the flooded tracks.

About five to 10 trains were affected, he said. It was not immediately known if any were passenger trains.