EDMONTON – Alberta Premier Rachel Notley says the “ocean of fire” that hit Fort McMurray burned about 10 per cent of the buildings, but the hard work of firefighters saved the bulk of the city so it can be rebuilt.

“The fast action and the hard work and the dedication and the smarts of these first responders has, it appears, saved almost 90 per cent of the city of Fort McMurray,” she said Monday after a ground tour of the devastation. 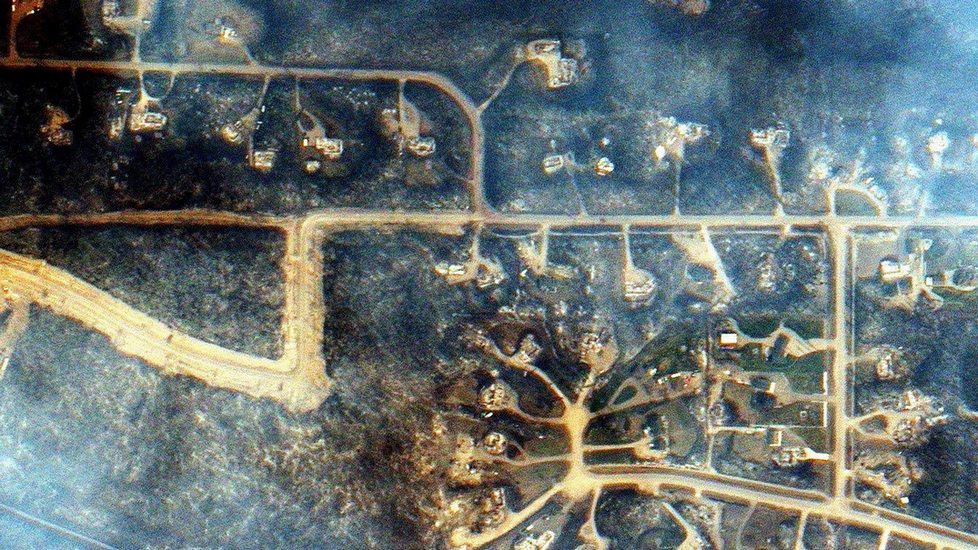 A satellite image shows destroyed houses in a neighbourhood along Sommer Way (centre) in Fort McMurray, Alta. on May 6, 2016. Smoke from the fires prompted Environment Canada to issue air quality advisories for northeastern Alberta and northwestern Saskatchewan. THE CANADIAN PRESS/EARTH-i/21AT MANDATORY CREDIT

“It reinforced to me how much work and how much success was achieved over the last few days by those heroic firefighters, who managed to stop a fire that, on one hand, was capable of levelling blocks and blocks of houses and then suddenly stopping right next to houses that remain untouched and habitable,” Notley said.

All 80,000 residents ordered out last Tuesday will have to wait at least two weeks to hear when they might be allowed to return.

“I truly believe nothing else could have been done that wasn’t done to protect the people and the structures within our city,” said Allen. “They’re rewriting their formulas on how fires behave based on this fire.”

Notley said 2,400 buildings were torched, but 25,000 were saved, including the hospital, municipal buildings and schools.

Much of the downtown and the water treatment plant are also intact.

“This city will emerge from this emergency with real structural resiliency with most of its critical infrastructure saved,” said Notley.

“This city was surrounded by an ocean of fire only a few days ago, but Fort McMurray and the surrounding communities have been saved and they will be rebuilt.”

But Notley reiterated that the community is not yet safe for people to return.

Hot spots remain and large sections of the city don’t have power, gas or water. She said a plan is to be developed over the next two weeks for the orderly and safe return of residents.

Evacuees have been out of their homes for a week under a mandatory evacuation order. They were forced to flee, some with just minutes notice, when a ravenous wildfire, pushed by shifting winds, overwhelmed several neighbourhoods in the south and southwest.

Again, fire chief says about 85 percent of structures in #ymm were saved pic.twitter.com/NyORFDdMYG

Darby said between 40 and 50 per cent of Fort McMurray could have been destroyed if firefighters hadn’t been able to hold back the flames at key points, especially the downtown.

Allen: Fire formulas are being re-written based on the #ymmfire

Some of the hardest-hit areas are nothing more than acrid wastelands of soot, ash and concrete.

As we turn the corner, reporters on bus say "oh my God" #ymm #ymmfire pic.twitter.com/CFXJb4VIjY

beacon hill. Many homes have been incinerated. pic.twitter.com/sdVYjdSjK8

Reporters who were also given a tour saw scorched skeletal outlines of furniture, vehicles and buildings. A cracked birdbath. The metal outline of a shed. A front doorstep leading to nowhere. Kids’ bikes burned where they were chained up. Metal-topped barbecues with melted knobs on flame-streaked patios.

Homes that appear not to have been touched now face craters just across the street. Pristine bus stops and mailboxes remain ready for business next to charred ruins.

Fire chief says they were overwhelmed in Beacon Hill. they made decision to retreat here and save homes elsewhere pic.twitter.com/q2lhITlh1s

The dominant colours are blacks, greys, whites and ochre.

The hazy skyline is punctuated by towering light poles and the odd tree: Tall, black and twisted with stubby twig arms.

The Super8 motel is gone. Only the signature red-and-yellow sign remains.

Cars and trucks remain torched where they were abandoned, their paint jobs blistered and cracked. Wheels are burned to blackened hubs, upholstery is consumed to the springs, windows are smashed and dashboards melted to hardened goo.

It’s a world of irregular shapes and fractured lines. Sections of jagged walls and brick rise from black-grey foundations like broken off sections of jigsaw puzzles.

Walls, beams and posts lie folded and twisted on top of one another. Utility meters bend to the left and right. Trees droop. Blown-out top floor windows are open to the sky in both directions. Blackened washers and dryers sit like lonely cubes. Over there is a bathtub.

There is wreckage everywhere.

But there are signs reconstruction has begun.

Teams work on power lines into the city, 435 kilometres northeast of Edmonton.

The evacuees have been staying in hotels, campgrounds, with friends or at reception centres. The main one in Edmonton has had to deal with an added problem – about 50 people have fallen ill with a stomach bug.

Ft Mac mayor has 100%of city's infrastructure externally intact but needs "a little rejigging on the inside", #YMMfire

Notley says nearly 90% of Fort McMurray has been saved but she continues to stress that the city is still not safe for residents. #ymmfire

The wildfire sat at just over 2,000 square kilometres on Monday and moved within 30 kilometres of the Saskatchewan boundary. But lower than seasonal temperatures were giving crews a chance to extinguish hotspots in Fort McMurray.

Across the country, the Red Cross has collected $60 million in donations, including on Monday $250,000 from Atlantic Canada and $500,000 from Unifor, a union representing 4,000 oilsands workers.

Allen said everything is being done to get people back to the community as soon as possible.

“We are dedicating every necessary resource to bringing you home,” he said.

This trailer park had been flooded in 2013. They had just rebuilt. #ymmfire #ymm pic.twitter.com/WnKctlp95D

Fire Chief #FortMcMurray says 85% of the structures are still standing in the city. #FortMacFire @CTVNews pic.twitter.com/c735oWqxRO

Reuters took a picture of me taking pictures for you. #ymmfire That's Abasand. pic.twitter.com/mO42OsSv1u