“Sitting on the sidelines is not an option while climate change threatens our future,” Vancouver Mayor Gregor Robertson emphasized last week in announcing the city’s next moves to prepare for sea level rise over the next century. 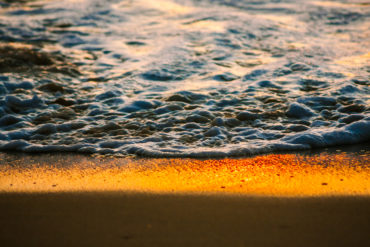 “The massive costs and damages to Vancouver resulting from climate change and sea level rise can’t be ignored,” Robertson says in a statement from the City of Vancouver. The city’s sea levels are expected to rise one metre within the next 100 years.

For example, the city cites an estimate from the Fraser Basin Council, which concluded flood scenarios on the Fraser River and coastal areas would trigger the most costly natural disaster in Canadian history – estimated costs are $19.3 billion to $32.7 billion in direct losses – if no proactive measures are taken.

Related: $39 billion worth of private property at risk, in San Francisco, from 1-metre extreme tide and 1.68-metre rise in sea level: RMS

Despite mitigation efforts locally, “scientists project that sea level rise will pose a significant challenge to coastal cities across the world over the next century and beyond,” Robertson says in the statement.

“By taking action today to protect our land, environment, people’s homes and our iconic landmarks from climate change impacts, we’re making our city more resilient and saving billions of dollars in the long run,” he contends.

City plans and preparations for sea level rise have been unfolding over the last few years. In line with Vancouver’s Climate Change Adaptation Strategy, a two-part Coastal Flood Risk Assessment was carried out, the first part of which was released in 2014 and the second part earlier this year. 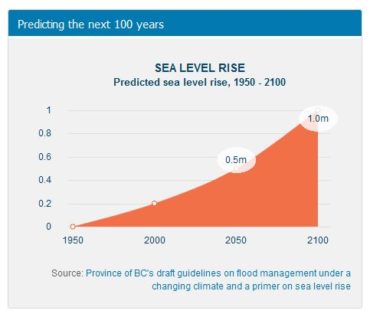 Findings in the second part “will provide the basis for a future sea level response plan to address sea level rise over the next century, with medium- and long-term actions that complement our existing climate change mitigation strategies,” Robertson reports.

Related findings will then be incorporated into the planning of future coastline projects, which is expected to “ensure we build and plan resilient infrastructure and neighbourhoods, and preserve the ability to implement flood management interventions when needed in the future,” he adds.

Although current flood risk is limited to a few areas of the city, Robertson cautions that will change as sea level risk is added to the equation. “In 2017, we plan to begin engaging with neighbourhoods that will be the most impacted by sea level rise in the near future to identify the best adaptation options,” he says.

Actions taken to date include the following: