Volunteers in Manitoba town scramble to halt flooding from nearby river

CARMAN, Man. – The threat of flooding from an ice-choked river has prompted a big southern Manitoba town to declare a state of emergency. 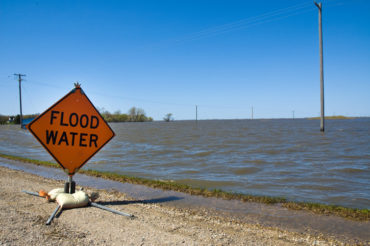 Officials in Carman say rising water on the Boyne River is causing flooding and sewer backups in the community of 3,400, about 90 kilometres southwest of Winnipeg.

About 400 people are affected and an estimated 40 homes have water in their basements.

A message posted on the town’s website on Sunday said water quality is secure, but residents are being asked to reduce their water usage to alleviate pressure on the sewer system.

The town is one of a number of communities and municipalities in Manitoba that have declared emergencies, or are under flood watches or high-water advisories because of overland flooding brought on by spring runoff.

Water turned some homes in Carman into virtual islands on Sunday. The flooding washed out roads and forced crews to build a dike along a major highway in the town.

“I’ve been here for 35 years and I’ve never seen this kind of water backing up,” said Carman Mayor Bob Mitchell. “We’re just worried we won’t be able to do anything until Mother Nature melts the ice.”

Volunteers showed up at some of the hardest hit properties and laid sandbag to help keep homes dry.

“It’s overwhelming,” said volunteer Devin Veenendall. “We are trying to stop any damage.”

Bernice and Russel Patterson bought a retirement home in Carman near the Boyne 13 years. They’re among those whose properties are threatened.

“It makes me sick. I want to throw up, but what are you going to do,” said Bernice. (The Canadian Press, CTV Winnipeg)

East of Pierson. Lakefront property for these cows. #cbcmb pic.twitter.com/YfZvVJd3Xg

Submitted video of a large ice jam in Swan River that has lead to a local state of emergency. A dozen homes at risk. #cbcmb #mbflood pic.twitter.com/3uxjBsGsJY