Nearly a year after the massive wildfire that devastated Fort McMurray, Alta., a climate scientist says there may be more forest fires in Canada this summer. 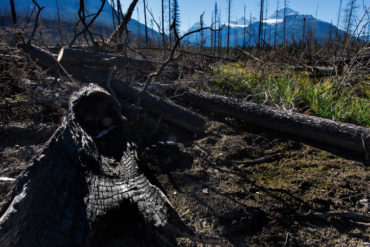 “If the forecast’s right that it’s a warmer than normal summer, we’ll probably have more fires,” says Mike Flannigan, a meteorologist and professor in the University of Alberta’s renewable resources department.

Flannigan says there are about 7000 forest fires a year in Canada on average. But that number can vary dramatically depending on the weather. Warm temperatures mean a longer fire season, and more susceptible conditions.

Forest fires are usually triggered either by lightning or by human activity. But Flannigan says there’s an increased risk of both kinds of fires in warmer weather, particularly in climates that are also dry and windy.

A warm summer also means a longer fire season, he says. Fire damage is typically worst in mid-summer, with July as the most dangerous month.

However perhaps the worst wildfire in Canadian history, the Fort McMurray blaze that forced the evacuation of all residents in the area for weeks and caused massive damage to the city, started in May, 2016.

There are concrete steps people can take to eliminate the risk of fires, Flannigan says. It’s important to be thorough when extinguishing campfires. “Fires can smolder for long periods of time and burn underground if conditions are right,” he says. “You think you just dump one bucket of water on it, and you’re done? It takes more effort than you sometimes think.” He also advises following all fire bans.

The state of Canada’s ecology and the reality of a changing climate means forest fires will always be something we must contend with, Flannigan says. “There will be fire on the landscape. We do things to minimize the risk, but we never can eliminate it.”