Waters to rise again in Ottawa area, even as N.B. turns to flood recovery mode

Water levels are expected to rise again this weekend between Ottawa and Montreal, even as New Brunswick’s floods are effectively over.

Officials warned late Thursday that “significant” rainfall is expected to raise water levels in the Ottawa/Gatineau area down to Montreal, although they aren’t expected to exceed the previous highs of earlier this spring.

Water levels to the west of Ottawa, between Mattawa and Lac Deschenes, will also rise this weekend, and the peak could exceed maximum levels earlier this spring – and even previous historical highs. 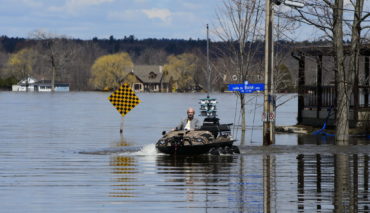 A resident makes his way along Morin Road though floodwaters from the Ottawa River in Cumberland, Ontario on Tuesday, April 30, 2019. THE CANADIAN PRESS/Sean Kilpatrick

“The City of Ottawa – which has been in a state of emergency since April 25 – said with water levels expected to rise in the city, people should keep sandbag walls intact.

Flood waters will be at a similar level to the peak on April 30,” the city said in a tweet Friday afternoon. “City staff will advise residents when it is safe to remove sandbags.”

He said there are fewer damage reports than last year, and credits people being better prepared.

‘They sandbagged their properties and relocated things out of harm’s way. As fundamental as that is, it was a huge difference and a huge improvement over last year,” he said.

MacCallum said there were also lessons learned about the resources required.

“Getting the military assistance early in this operation was advantageous. I would say the same about the other resources we brought in from other organizations federally and provincially.”

The Transportation Department reports 75 roads have reopened to traffic and only 13 remain closed for inspections and repairs.

The Canadian Red Cross says 69 households remain in temporary housing because of the earlier flooding, and it’s offering $600 to help meet immediate needs under its own assistance package.

Satellite offices in Saint John, Hampton, Fredericton and Burton will be open from 9 a.m. to 5 p.m. Monday to Friday, and from 9 a.m. to noon on Saturdays.

A temporary office has already opened in the Maugerville Community Centre and three more will open next week in Grand Bay-Westfield, Jemseg, and Quispamsis.

Claims officers will help with applications and answer questions about the recovery process.