Hurricane Maria is causing river levels to approach or exceed record levels in the United States territory of Puerto Rico, while Hurricane Irma could cause total economic losses of up to US$95 billion in the U.S. and the Caribbean, catastrophe modeling vendors report. 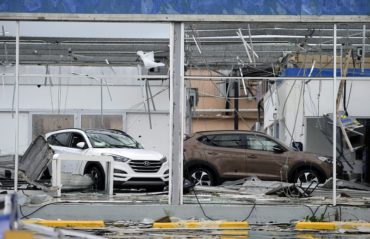 A car dealership lays in disarray after the impact of Hurricane Maria, which hit the eastern region of the island, in Humacao, Puerto Rico, Wednesday, Sept. 20, 2017. (AP Photo/Carlos Giusti)

That storm brought a storm surge of six to nine feet to Puerto Rico and is “inundating” that island with 12 to 18 inches of rain, or 305 to 450 mm, “with isolated amounts of up to 25 inches,” or 645 mm,  stated Verisk Analytics Inc.’s AIR Worldwide unit Wednesday in a release.

“River levels are approaching or exceeding record levels across Puerto Rico, according to data from the US Geological Survey,” AIR Worldwide added. “Flooding from lashing rain is widespread, and several Puerto Rico municipalities along Rio La Plata are under severe flash flood warnings. Widespread flooding was reported in the capital of San Juan.”

Puerto Rico is still getting intense rain from #Maria, turning streets into rivers. Millions are predicted to be without power for months. pic.twitter.com/fqb7QWOTYN

Risk Management Solutions Inc. “has estimated that the insured loss from Hurricane Irma will be between $35 and $55 billion,” RMS said in a release Wednesday. “This estimate represents the insured losses associated with wind, storm surge, and inland flood damage across Florida and the southeast United States (including losses to the National Flood Insurance Program). It also includes insured loss associated with wind and storm surge in the Caribbean.”

RMS is estimating total economic losses in the U.S. and the Caribbean, of US$60 billion to US$95 billion.

Related: Irma losses in U.S. and Caribbean could reach $50 billion while Jose could cause ‘minor to moderate coastal flooding’ in New England

The company added that Irma “was the eighth named storm of the 2017 North Atlantic hurricane season” and the first Category 3 or greater hurricane to make landfall in Florida since Hurricane Wilma in 2005.

Meanwhile, the National Hurricane Center said Thursday morning that a hurricane warning is in effect for part of the Dominican Republic, the Turks and Caicos Islands and the southeastern Bahamas.

Before and after photos of damages from #Maria in #PuertoRico taken by Resident Commissioner Jenniffer González. #HuracanMaria pic.twitter.com/ac0NyAEfLU

“Flash flood emergencies continue in portions of Puerto Rico due to persistent heavy rainfall from Maria’s trailing rainbands,” the Hurricane Centre said, adding that an additional four to eight inches (50 to 100 mm) is predicted for Puerto Rico through Saturday.

It is also warned of possible “life-threatening flash floods and mudslides” on islands including the U.S. and British Virgin Islands, northern and eastern Dominican Republic, Turks and Caicos, northern Haiti and parts of the Bahamas.

The storm knocked out electricity to the entire island of Puerto Rico, the Associated Press reported, adding it destroyed 80% of houses in a small fishing community near the San Juan Bay.