More than a dozen homes in a northern Alberta Metis community have been destroyed by an aggressive wildfire and there are concerns that more properties may be consumed.

“It’s like a burnt piece of toast up there,” said Blake Desjarlais of the Metis Settlements General Council, describing the fire’s path of destruction in Paddle Prairie, about 70 kilometres south of the town of High Level. 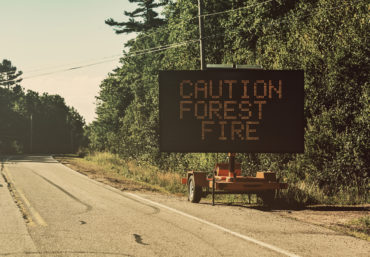 More than 10,000 people are out of their homes in the northern part of the province, with Trout Lake being the latest community to empty Friday morning.

But the first reports of destroyed homes has come from Paddle Praire.

Desjarlais said that although the community itself is safe for now, at least 15 houses and two community structures have burned. Bison and cattle ranchers have also had to turn their animals loose.

“They had to release them and they don’t know the status of their animals,” Desjarlais said.

“That fire would have chased them really, really far away or they wouldn’t have made it out of the fire at all.”

Desjarlais said local residents are upset they didn’t get more notice to prepare to leave.

The province said Friday the Chuckegg Creek wildfire near High Level had grown to 2,600 square kilometres. Residents from that town have been out of their homes for more than a week.

People in Slave Lake, a town that was partially destroyed in a 2011 blaze, have been told to be prepared to leave with eight hours notice because of a fire that the mayor says is burning about 30 kilometres away. That fire, which has grown to 1,800 square kilometres, is not considered an immediate threat.

On Thursday, smoke from the fires enveloped points south, including Edmonton, in a thick, acrid, haze that limited visibility and made it difficult to breathe.

Poor air quality remained over much of the province Friday.

The Alberta government said weather forecasts for the next two weeks will make fighting the fires difficult. Firefighters were in the province from across Canada doing their best to corral the flames.

Across the province, there were 29 active fires and 10 were considered out-of-control.

The province is slightly under the five-year average for number of fires. But the amount of land burned is more than 3.5 times higher.