When determining accumulation of risk, wildfire presents an “additional complexity” for insurers and reinsurers, a speaker suggested at a recent conference.

“Wildfire is a really complex peril,” said Manuel Chirouze, managing director, natural hazards and geoscience for the Americas at Guy Carpenter & Company LLC. “Most of the losses will be coming from the wildland-urban interface and that’s an area that is both rapidly evolving and where the built environment is rapidly changing.”

Chirouze made his comments Feb. 2 during the CatIQ Canadian Catastrophe Conference (C4), produced by Catastrophe Indices and Quantification Inc., a sister company to MSA Research Inc. 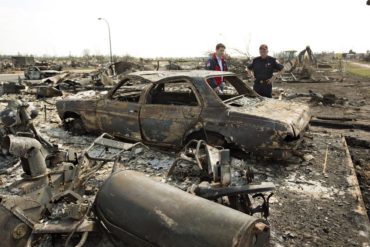 Prime Minister Justin Trudeau, left, and Fort McMurray Fire Chief Darby Allen look over a burnt out car during a visit to Fort McMurray, Alta., on Friday, May 13, 2016. THE CANADIAN PRESS/Jason Franson

“Contrary to straight up accumulations where you can say, ‘What will happen if an explosion were to occur here,’ when you have wildfire you have a very very different pattern of the impacted areas,” Chirouze said during a C4 session titled Wildfire Risk Management.

Also speaking on the panel was Andreas Siebert, head of geospatial solutions at Munich Re.

“We have a lot of experience with wildfire in California and Australia,” Siebert said. “We have no model for Canada, which is strange and wildfire on a global scale has always been a poor cousin in the modeling community due to the amount of affected values.” 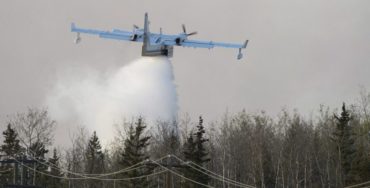 C4 was held Feb. 1 to 3 at the Allstream Centre on the Canadian National Exhibition grounds.

“In the end, doing an accumulation of that is purely based on a sum of the assets that is within an area that is exposed is not enough,” Chirouze said.

The panel was moderated by Glenn McGillivray, managing director of the Institute for Catastrophic Loss Reduction, who alluded to wildfires in Kelowna in 2003 and Slave Lake in 2011.

“Even despite those two big fires, the Canadian insurance industry never really concerned themselves with wildfire,” McGillivray said. “We are the third most forested country in the world. We have probably billions if not trillions of assets in the wildland-urban interface and deep in the woods.”

The most expensive natural catastrophe – when measured by insured losses – was the Alberta wildfire that started in May, 2016. It resulted in the evacuation of about 88,000 people – including the entire city of Fort McMurray, Verisk Analytics Inc.’s Property Claim Services unit noted earlier.

Estimates of insured losses range from CatIQ’s estimate of $3.58 billion released in July to PCS’s estaimte of $4.67 billion.

European reinsurers covered nearly half of the loss, analysts from A.M. Best Company Inc. suggested at the firm’s Insurance Market Briefing Canada, held six months after the disaster. Fort McMurray “was an unmodelled event,” A.M. Best senior financial analyst Joel Silverthorn said during his firm’s market briefing Nov. 10 at the Sheraton Centre in Toronto. “The reinsurers are the ones shouldering a good portion of it.”

Before the Fort McMurray disaster, Canada’s most expensive natural catastrophe, by insured losses, had been the flooding in 2013 in southern Alberta. IBC reported earlier the insured loss was about $1.7 billion – much lower than total economic losses of about $6 billion because overland flood for residential properties was generally unavailable in Canada at the time.

Canada’s fourth-most expensive natural disaster arose July 8, 2013 when a thunderstorm caused widespread flooding and led to about $1 billion in insured losses in the Toronto area. Before the summer of 2013, Canada’s second costliest natural disaster – at $700 million – was the Slave Lake wildfire. The 1998 ice storm affecting Eastern Canada now ranks third but ranked first before 2013.

“I remember after Slave Lake, one of the wildfire experts we deal with says, ‘Glenn, there are thousands of Slave Lakes across Canada,'” McGillivray said Feb. 2 at C4.