DELTA, B.C. – The Burns Bog fire southeast of Vancouver was 10 per cent contained Monday morning, with crews hoping to fully contain the flames by the end of the day. 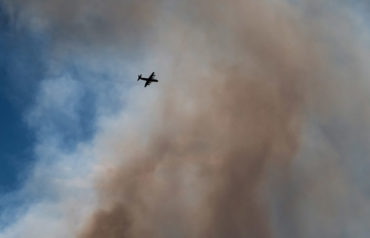 A firefighting plane navigates through smoke from a wildfire burning at Burns Bog in Delta, British Columbia on Sunday, July 3, 2016. Photo by Darryl Dyck, The Canadian Press

Chief Dan Copeland of the Delta Fire Department said the blaze is between 50 and 70 hectares in size, and 90 firefighters from a number of jurisdictions were battling the fire.

“We’re hoping the winds don’t pick up much more than they are right now,” he told a news conference on Monday morning. “It’s definitely improved from yesterday.”

Copeland said one firefighter was treated in hospital after suffering an injury caused by a medical condition, but he declined to give further details.

Burns Bog is one of North America’s largest peat bogs and flames can sink under the dry peat, where they burn out of sight.

“That is the biggest challenge here,” said Copeland. “We’re hoping we can get a lot of the spots before it goes deep into the peat.”

He said aircraft including water bombers were on standby while helicopters helped fight the blaze. Several hot spots were put out overnight, he said.

The fire was first reported late Sunday morning and Delta police have said it could take at least a week to extinguish.

Copeland said the cause of the blaze was still under investigation.

Highway 17 was expected to remain closed from Highway 99 to the Highway 91 connector for the rest of the day. Some businesses have been evacuated.

The fire has gotten right up to the highway now. #BurnsBogFire pic.twitter.com/1KqakwvRIE

Delta Mayor Lois Jackson said the fire is a “major emergency,” and the community was under provincial emergency status. Crews had to scramble as it was a long weekend, she said.

“But everybody’s on hand. Everybody mustered. The people from the province, bless their hearts, they were here as fast as they could get here,” she said.

“The faster you can get at a fire, the better, and the harder you can hit it, the better. I think all those things took place yesterday.”

Forty provincial firefighters, 20 from Delta Fire and 20 from Metro Vancouver were fighting the blaze.

Naomi Yamamoto, B.C.’s minister of state for emergency preparedness, and Forests Minister Steve Thomson both called and “pledged everything they had,” said Jackson.

Jackson said Metro Vancouver was monitoring air quality as smoke had drifted into Vancouver, but conditions had improved since Sunday and it had not issued a general advisory.

She said Delta would consult with Metro Vancouver’s Burns Bog scientific advisory panel for guidance in the recovery of the 30-square-kilometre nature reserve.

Jackson was also mayor in 2005, when a blaze in Burns Bog grew to more than two square kilometres and took more than a week to put out.

“The last big fire, at this stage, was I think a lot bigger than this one,” she said Monday. “We got this one fast, I think.”

Dual air firefighting efforts with a helicopter and water bombers as well as fire trucks on the ground #BurnsBogFire pic.twitter.com/ySXFalAIax

Helicopters dropping water on #BurnsBogFire to contain the blaze pic.twitter.com/EOffFtylM2

In the Tilbury Industrial area in #Delta. Evacuation order for some businesses. Hwy 17 closed. #BurnsBogFire pic.twitter.com/hVEaOv2MEe