HALIFAX – Parts of Atlantic Canada were digging out Sunday after a winter storm dumped 35 centimetres of snow on some areas. 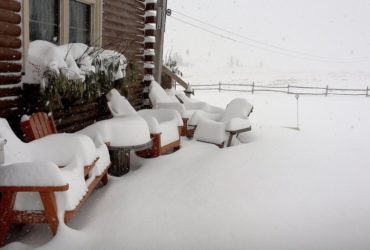 Environment Canada said as much as 35 centimetres of snow fell over parts of Nova Scotia and P.E.I. overnight Saturday, while southeastern New Brunswick received about 25 centimetres. Photo: @WestofSouris.

Environment Canada says as much as 35 centimetres of snow fell over parts of Nova Scotia and P.E.I. overnight Saturday, while southeastern New Brunswick received about 25 centimetres.

Many flights at Halifax Stanfield International Airport were delayed or cancelled and most major roads in Nova Scotia were still snow-covered Sunday afternoon.

About 6,000 Nova Scotia Power customers were briefly in the dark Sunday, but that number dropped to about 200 by early afternoon.

15 cm of snow down in Argyle this afternoon. School bus in the ditch. Everyone okay. @weathernetwork @YHZweatherguy @NateTWN @MurphTWN #snow pic.twitter.com/BUlmrXtcjY

Most of western Newfoundland was under a snowfall warning Sunday, with 20 centimetres expected by the afternoon before the snow changed to ice pellets and freezing rain.

So glad I decided against buying a white SmartCar! #PEI #storm #PEIstorm pic.twitter.com/agjFg6fZE4