FORT MCMURRAY, Alta. – A precautionary evacuation is clearing out employees at work camps north of Fort McMurray due to the threat of a quickly spreading wildfire.

Non-essential personnel are leaving while others are staying to conduct work on the plant and engage in firefighting. 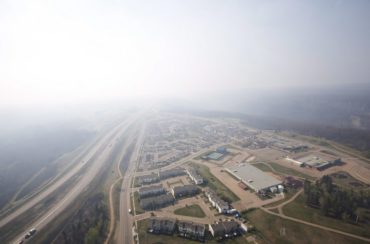 Smoke fills the sky from wildfires over Fort McMurray, Alta., on Friday, May 13, 2016. A wildfire left a swath of destruction last week. THE CANADIAN PRESS/Jason Franson

There are about 4,000 workers at 12 camps in the area, including many at Suncor and Syncrude.

Officials say another 500 to 600 people in four small camps along Aostra Road are under a mandatory evacuation.

Scott Long of the Alberta Management Agency says there is no panic and the evacuations are being done in an orderly manner.

The Rural Municipality of Wood Buffalo says the fire is moving 30 to 40 metres per minute and is expected to burn six kilometres in two hours.

“This controlled, precautionary evacuation is an example why it is note safe to be in the Regional Municipality of Wood Buffalo at this time,” the municipality said late Monday afternoon in a news release.

Syncrude Canada tweeted that buses are transporting workers to a safe location as part of its emergency plan.

Sneh Seetal, a spokesman for Suncor Energy, called it a “precautionary measure.”

“The facilities are not at risk,” she said. “However, we felt it was important to take these steps in the interest of putting people first.”

All camps north of #ymm, up to and including Ruth Lake Camp, & all camps that use Aostra Rd are to evacuate #ymmfire https://t.co/axK8qWFxvj

Following mandatory evacuation of Noralta Lodge due to smoke, Syncrude is relocating workers residing in the facility to safety. #ymmfire

“The fire we believe is about 35 kilometres away,” he said. “There is a significant amount of smoke.”

"For Syncrude and Suncor everything is precautionary. It's the right thing to do for the safety of their workers." pic.twitter.com/VmXCgj7td5

#ymmfire is moving 30- 40 metres a minute, but officials say it is expected to slow as temperatures cool.

Syncrude and Suncor are under precautionary evacuation. Four small camps mandatory because road could have closed them in #ymm #ymmfire

Buses are transporting workers to a safe location as part of our emergency plan. #ymmfire

The entire population of Fort McMurray, more than 80,000 residents, are now entering their third week away from home. Many of the work camps were used to house evacuated residents who fled north when fire broke through into the city the afternoon of May 3.

Those residents were taken to points south, including Edmonton and Calgary, several days ago and workers were moved back in to begin ramping up oilsands production again.

About 2,400 structures were destroyed in Fort McMurray, but essential infrastructure, including the hospital, water treatment plant and the airport, remain intact.

Crews continued to battle hot spots on the edge of the city Monday while the first still raged out of control deeper in the forest. Hot, dry conditions were not helping firefighters.

Air quality in #ymm is at a high health risk and expected to worsen overnight. https://t.co/rNvsCNj78T #ymmfire pic.twitter.com/HYUbjL3Byy

Alberta Premier Rachel Notley said the air quality health index is normally one to 10, with 10 being the worst, but the reading this morning was at 38.

Notley said the conditions were hampering efforts to get residents back to their homes.

Today's update on the Alberta fire situation & steps being taken to prepare #ymm for the safe return of residents: https://t.co/wz6hK2k1wy

“Alberta Health Services has recommended that members of the public who had been previously arranging to return to the area under various requests not return until those conditions improve,” Notley said. “This is something that could potentially delay recovery work and a return to the community.”

Our second adjusters allowed in yesterday and commented "it was literally raining ash in town last night" #ymmfire pic.twitter.com/X8BVe46Rzu

Karen Grimsrud, Alberta’s chief medical officer of health, said they expect the air quality readings to remain in the extreme range for the next couple of days.

She said workers in the area should be wearing respirators.

Another #fire, north of #FortMac friend sent me pics from the air #abfire immediate #evacuation pic.twitter.com/Gcjom6BqpY

"We knew this would be a difficult fire day… The fire is about 15-20km to the south of major oil sands facilities" – Chad Morrison, WIO

Here's a map that includes many of the camps affected by this new evac order today. #ymmfire #fortmacfire #ymm #cbc pic.twitter.com/HhSixTMChG

#Ymmfire moving up north we are in good spirit, strong & ready to go back to work tomorrow #StayStrongYmm pic.twitter.com/GhjY9Z5e6W

We just got our way out… fire is heading NE to a 30-40m/hrs#ymm #ymmfire pic.twitter.com/VGb9XedkP6

The view from north of town right now. Doing our best to get information for you about evacuations of camps #ymmfire pic.twitter.com/09byleUILP

Sign says it all at #ymm int'l #ymmfire @ctvedmonton pic.twitter.com/eDgRjxv07D